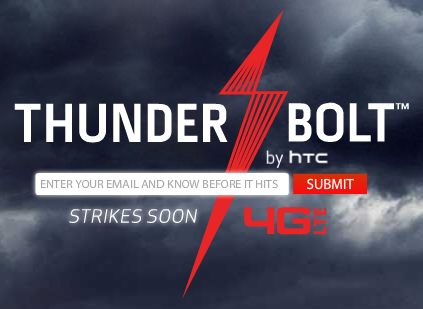 Verizon’s landing page for their HTC Thunderbolt has gone live today, advising visitors that the device is about strike soon.  Widely expected to land on February 24th, the phone will usher in the carrier’s 4G LTE era .  We’re fans of the mini-site as it doesn’t have any of the “Droid” stuff that Verizon‘s Android devices have become synonymous with.  Android is in a position to sell itself on its own merits now and this HTC phone should do quite well.  It’s also just a cool little page to play around with, watching the lighting bolts in the sky and reading the specs.

If you’re not excited enough about the Thunderbolt, maybe you ought to check out the following video.  The short, 15-second clip has a little girl counting the space between lightning and thunder, getting closer with each strike.  It’s scary, awesome, and way too short.