Straight Talk advertises its $45 plan to have “unlimited” data, but anyone who reads the fine print knows that this claim isn’t entirely true. Okay, yes, you do have infinite data, but it was set up so that once you peaked at 2.5GB the data was throttled down to an almost unusable speed. Now the company is offering a jump up by a half to 3GB, with the price staying at the same point. 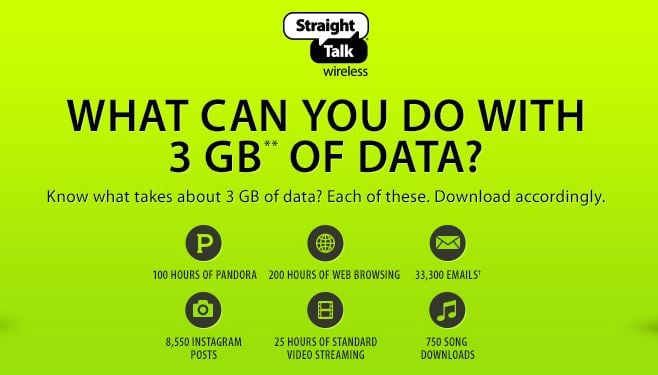 This is good news for customers of the Walmart-exclusive wireless company. Straight Talk has already seen extreme success due to its offer of a cheap unlimited plan, as well as the option to bring your own phone from other carriers. They’re apparently not going to stop trying to bring the best deals of any prepaid plan.

The $45 unlimited plan isn’t the only one that is changing, either. They will also add an extra 500 minutes and unlimited texts to their $30 “All you need” plan as well. This will work well for the people who don’t need the data or talk time, and use their phone mostly to text.

Straight Talk continues to dominate the prepaid phone market, and it looks like they aren’t in any rush to give up that position. Its obvious that they are determined to keep their prices to a minimum, while offering the same kind of service that the big carriers do. Every company has their shortcomings, but at least Straight Talk is attempting to remain on top.