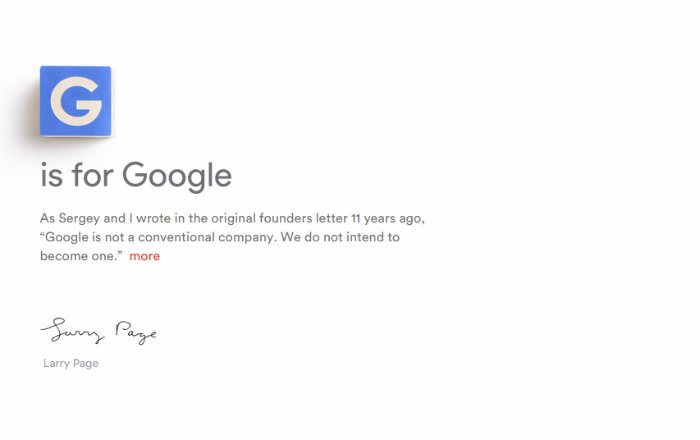 In what is some pretty darn surprising news, Google Co-Founder Larry Page has announced a few new changes to the company’s organization. The first of which, is made obvious by the title: Sundar Pichai, the man behind Android and Chrome, has been named the new CEO of Google. There are, however, some other new, and major, changes that have been made within Google.

This new structure will allow us to keep tremendous focus on the extraordinary opportunities we have inside of Google. A key part of this is Sundar Pichai. Sundar has been saying the things I would have said (and sometimes better!) for quite some time now, and I’ve been tremendously enjoying our work together… it is clear to us and our board that it is time for Sundar to be CEO of Google.

Google, and all of its other ventures, will now operate under a newly founded company, Alphabet. This newly founded company, will take all the various bits and pieces from Google and they will seemingly run more separate from the group. This hopes to allow these various sub-projects to run smoother and allows the company to have “more management scale”.

Alphabet is mostly a collection of companies. The largest of which, of course, is Google. This newer Google is a bit slimmed down, with the companies that are pretty far afield of our main internet products contained in Alphabet instead. What do we mean by far afield? Good examples are our health efforts: Life Sciences, and Calico . Fundamentally, we believe this allows us more management scale, as we can run things independently that aren’t very related.

From the post made by Larry Page via abc.xyz, Alphabet is allowing for more time to be devoted to projects that the company has been trying to grow. All of this, while, at the same time, allowing the bigger projects like Android or YouTube, to continue working on whatever is up their sleeves.

As for some type of game plan, Mr. Page was kind enough to give us an idea of what Alphabet aims to do as a whole, now that things are changed up:

All of the news surrounding this is still developing, so we will be sure to have more information as it becomes available. In the meantime, check out this crazy URL, abc.xyz/ and let us know what you think about these new changes to the regime.