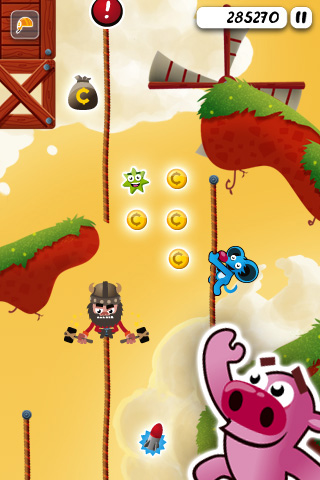 CraneBalls Studios, an up-and-coming app developer, has released SuperRope to Android. SuperRope, widely popular on iOS devices, is now available via the Android Market. The goal of the game is to climb as high as possible, jumping from rope to rope, and collecting coins, diamonds, megacoins, and more. The height that you reach, along with what you pick up along the way, total together to make your score. But it’s not all fun and ropes for long, as obstacles, land fragments, and even falling pianos and anvils will try to knock you down. It’s your job to avoid these challenges and make it as high as you can, with the help of some extras along the way, like mag-rockets and helicopters.

But wait, there’s more! The Funky Stars that you pick up while playing can be used in the Funky Store to purchase new backgrounds, characters, and a multitude of power-ups. The game is free to download, and you get Funky Stars just by playing. But if you want more, you can always buy some Stars via an in-app purchase as well. With so many options, the fun never ends– until you put down your phone, of course. The game is also integrated with OpenFeint, so you can share your high scores with your friends.

Sound like a game you’d enjoy playing? Then head on over to the Android Market and download it now! The full press release can be found below.

Las Vegas, NV – November 8, 2011 – Craneballs Studios LLC (www.craneballs.com), the developer behind successful iOS games such as Overkill, Blimp, SuperFall and others, announced today that its smash hit SuperRope, the free-to-play casual high-scoring game with more than 2 million players on iOS, is now available in the Android Market as well. The move marks the first of many games that Craneballs will be launching on Android over the coming months.

SuperRope is an extremely addictive vertical platformer game that challenges you to jump from rope to rope to see how high you can climb. As you go, you can collect coins, diamonds and other bonuses to boost your overall score. But watch out for falling items, as you never know when a deadly anvil, evil robot or even a falling piano might hurl out of sky and knock you off your rope. Get help by grabbing fun power-ups like rockets, little helicopters, magnets and mag-rockets to help improve your score.

SuperRope has received a 4.5 star rating in the iTunes App Store, and professional review sites have touted its “fun,” “addictive” game mechanics and design. Touch Arcade noted that they “quite liked the swiping controls and the rope climbing gameplay,” and Gamezebo called the game “cute…with adorable graphics and addictive gameplay.”

“We are proud to bring our distinctive style of casual games to the Android Market,” said Martin Chamrad, co-founder and CEO of Craneballs Studios. “Our goal with SuperRope was to build a game that was both simple and challenging, one that our users could play for two minutes or two hours. The game has seen tremendous success on iOS, and now we are pleased to offer it to all of the Android users who have written in practically begging us to release it for them as well.”

Set high in the sky where ropes dangle in mid-air – or are sometimes suspended from ominous-looking Octopi and other enemies who’ll try to knock you off balance – SuperRope’s animated characters and cartoonish backgrounds lend the game a festive air that players of all ages are sure to enjoy. The pinpoint controls and increasingly outlandish props will have you alternately squealing with delight and howling with despair.

Stand out features of SuperRope include:

5 Main Characters: The main protagonist is Pigger, a daring and determined little Pig who you is your first character in the game. As you progress, Pigger can be replaced with an array of other animated characters, including Hedge the Hedgehog, Mouser the Mouse, Mr. Sausage and Birdoo the Bird.

· 5 Lands: Starting out in Green Land, with its namesake rolling green hills, SuperRope then progresses through other beautifully landscaped levels such as Purple Hills, Blue Technicus, Middle Land and Cosmos, each with unique scenery and obstacles.

· 3 Degrees of Difficulty: Depending on your experience and expertise, choose from Easy (slow, with no falling objects and no rope obstacles), Medium (normal speed and no falling pianos), or Hard (fast speed with all the traps) to match your desired level of play.

· Virtual Currency: Give your character a boost by heading over to the Funky Store, where you can spend the coins and Funky Stars you’ve earned along the way on power-ups that help you collect more, fly longer or protect yourself from harm. Can’t wait until you earn enough Funky Stars? That’s okay. You can always use in-app purchases or choose to earn Funky Stars by taking part in marketing actions.

· OpenFeint Tie-in: SuperRope ties into OpenFeint’s social gaming network to let you track how your high score ranks against your friends or post your achievements to your network, making the experience more social and engaging.

SuperRope is immediately available for all Android devices using version 2.2 or above. The game can be downloaded in the Android Market or at http://URL.com.

Craneballs Studios is a leading developer of mobile games on the iOS and Android platforms. Founded in 2008 by three friends with a passion for games, Craneballs has since launched more than eight games that have been installed by millions of loyal mobile gamers. The company’s titles include Overkill, SuperRope, Monorace, Blimp, SuperFall, 33rd Division and others. Craneballs Studios is headquartered in Las Vegas, Nevada. For more information, visit www.craneballs.com.