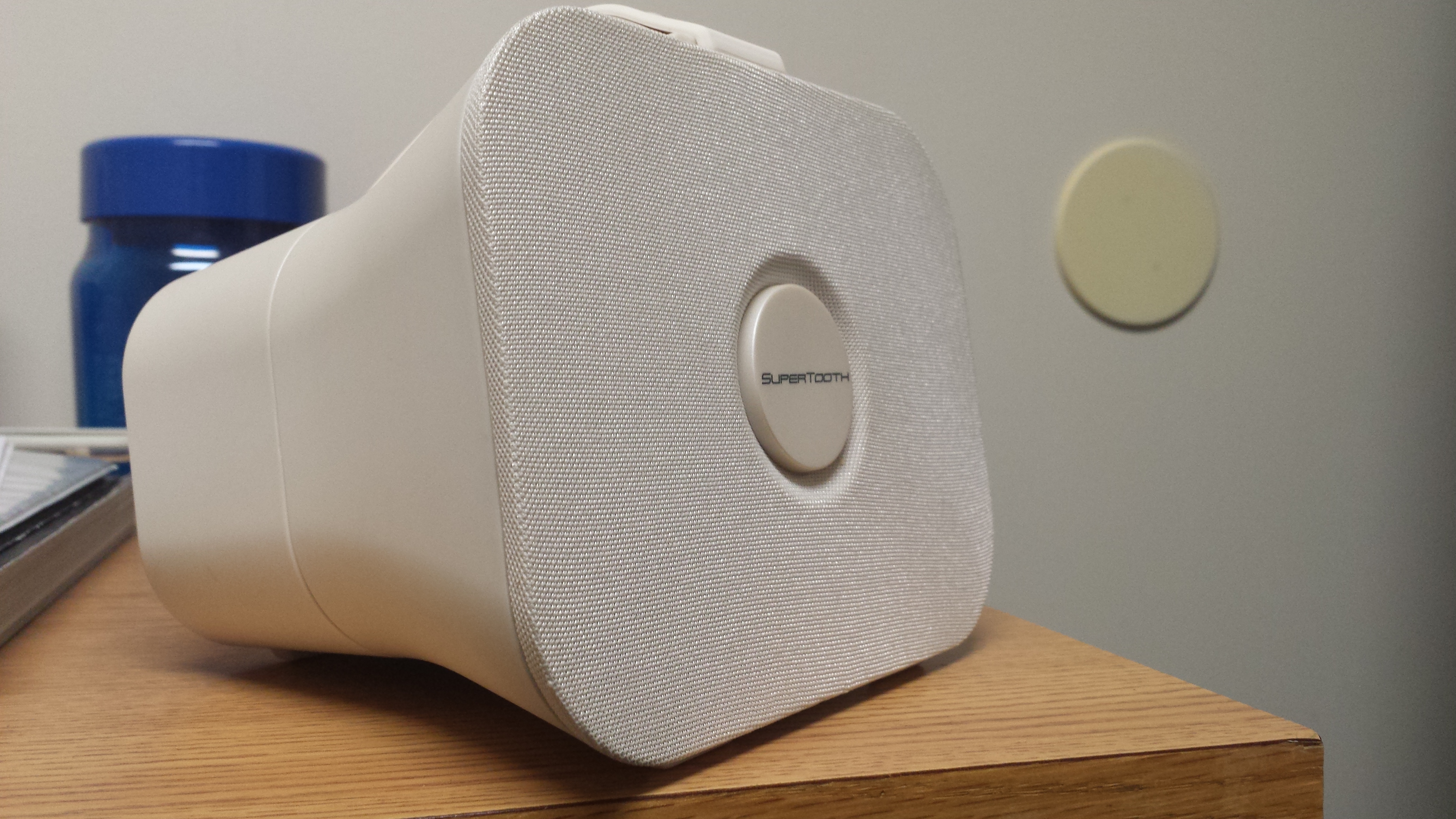 Bluetooth speakers are becoming more and more popular, and SuperTooth is quite the superpower in the market of Bluetooth accessories. They make everything from car kits to speakers to headsets, and one of their latest creations is the fourth installment in their Disco line of wireless Bluetooth speakers. We got a chance to review a Disco 4, and despite its simplicity, there’s a lot to talk about with this little speaker.

A quick rundown of the specs gives us an idea of what the Disco 4 is packing:

But enough of that, let’s get into the good stuff.

Beginning with the most obvious aspect, this speaker just looks awesome. It’s incredibly simple, and doesn’t try to dazzle anyone with flashy buttons or designs. Its horn shape reminds me of the old speakers that are used in the P.A. systems in high schools. You know, the ones mounted high on the walls of the hallways, that deafen students when the alarm sounds during a fire drill. While this is an obvious design choice, it’s actually done in a very sleek way. The speaker is square, but has rounded, subtle edges. It widens toward the front, giving it that classic look.

Up top is a handle that’s made of a silicon-rubber material. The handle is another simple addition that SuperTooth made, but it actually makes a big difference in the portability and general use of the speaker. Too many Bluetooth speakers are pill-shaped or otherwise don’t have any real means of grabbing onto them, so it was nice to see a simple handle thrown in to address this problem. After using the Disco 4 for a few weeks and carrying it around, a handle on a Bluetooth speaker just makes more and more sense. 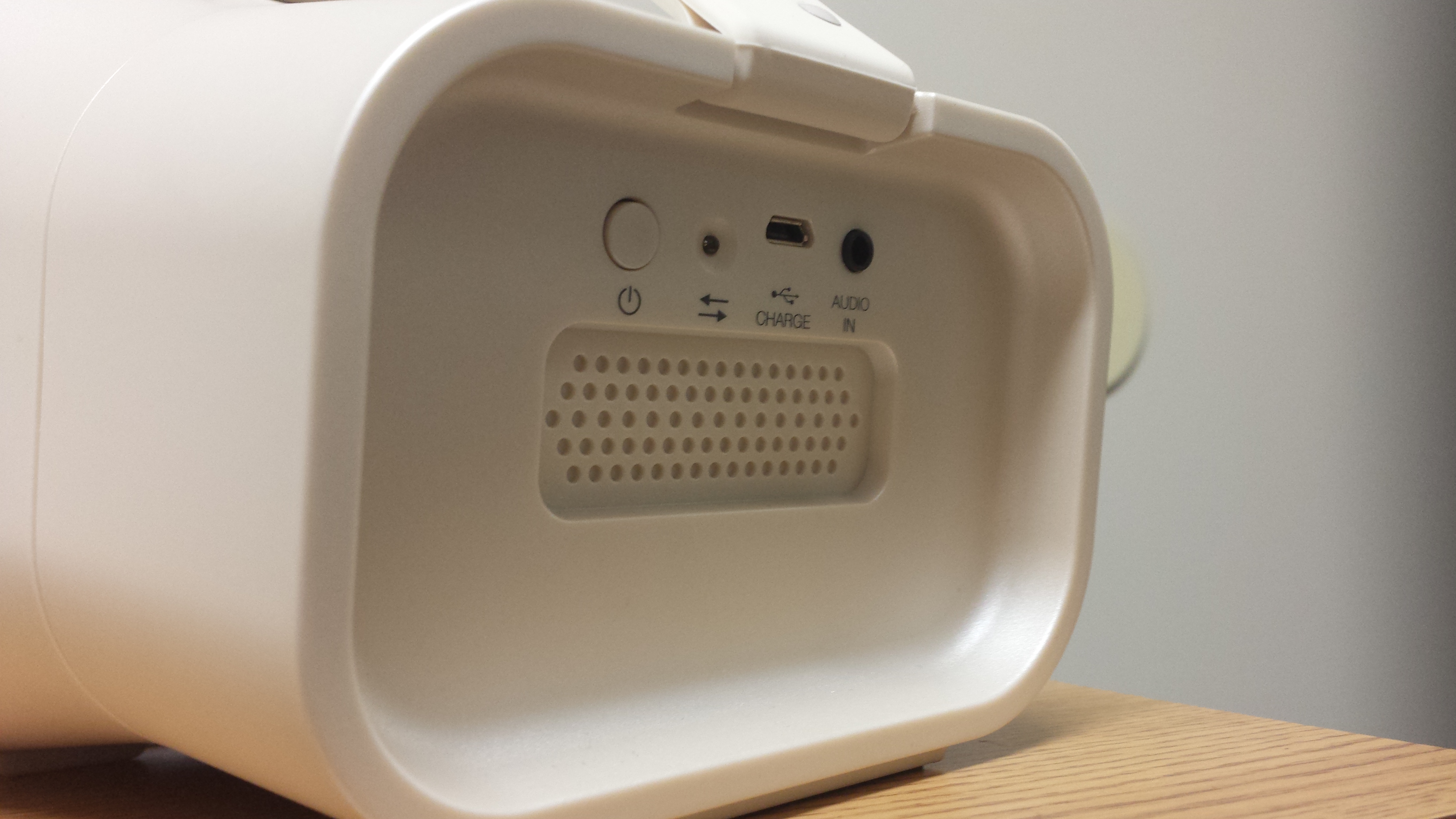 The back of the speaker is, as they say, where the magic happens. It’s pretty self-explanatory: a power button with multiple functions, a colored LED indicator, a microUSB charging port, and an optional auxiliary-out port for those devices that aren’t Bluetooth-friendly. Just as a clarification, the press images from the Disco 4’s CES announcement show it having several buttons on the top that aren’t present in the final production model. Supertooth didn’t mention why they removed these buttons (which appear to be play/pause and possibly volume buttons), but I would think that they were removed because they were essentially pointless. In any case, all the music functions and volume are controlled through your smartphone or tablet.

I think SuperTooth hit a sweet spot with the size of the Disco 4. It’s certainly not the smallest of Bluetooth speakers (at around 5 inches tall, 6 inches wide, and 5 inches deep), but it’s still small enough to fit on a tabletop without taking up too much space. Despite being one of the larger Bluetooth speakers on the market, the Disco 4 is remarkably light. I was actually surprised when I picked it up for the first time, because I expected it to be much bulkier than it is. SuperTooth put a lot of time and effort into making this thing as portable as possible, and it shows in the weight (or lack thereof). 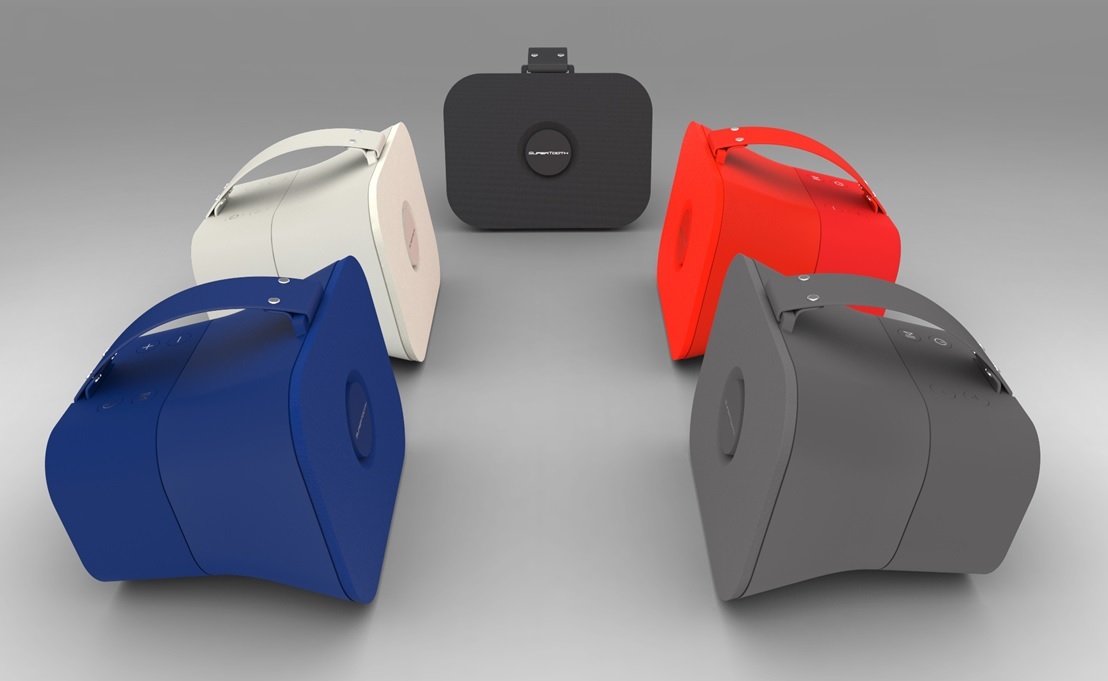 The Disco 4 is, in short, an awesome little speaker. Just from a sound perspective, it’s kicking out 8 watts of RMS power. Everything I played through the speaker came out crisp, clear, and loud enough to be heard from a fair distance away. There’s a surprising amount of bass coming from the Disco 4. It isn’t mind-blowing and you won’t be rattling any windows with it, but for most scenarios (i.e. parties, playing random songs, etc) it should be more than enough. All in all, the sound coming from this speaker definitely exceeded my expectations.

So it sounds great, but how usable is it? The short answer is that the DIsco 4 is remarkably easy to use. Within seconds (literally, I counted) of removing the packaging, I turned the speaker on, paired my phone and started playing my favorite tunes. There is almost no set-up required for the Disco 4. SuperTooth gave users a few different ways to pair their devices via Bluetooth. The first (and most obvious) method is by holding down the power button on the Disco 4 until it beeps and the LED indicator light flashes red and blue. This essentially puts the speaker in discovery mode, so all it takes is finding it via Bluetooth on your smartphone or tablet and pairing with it. This process takes a whole ten seconds, and I had no issues pairing my Galaxy S4 with this method. 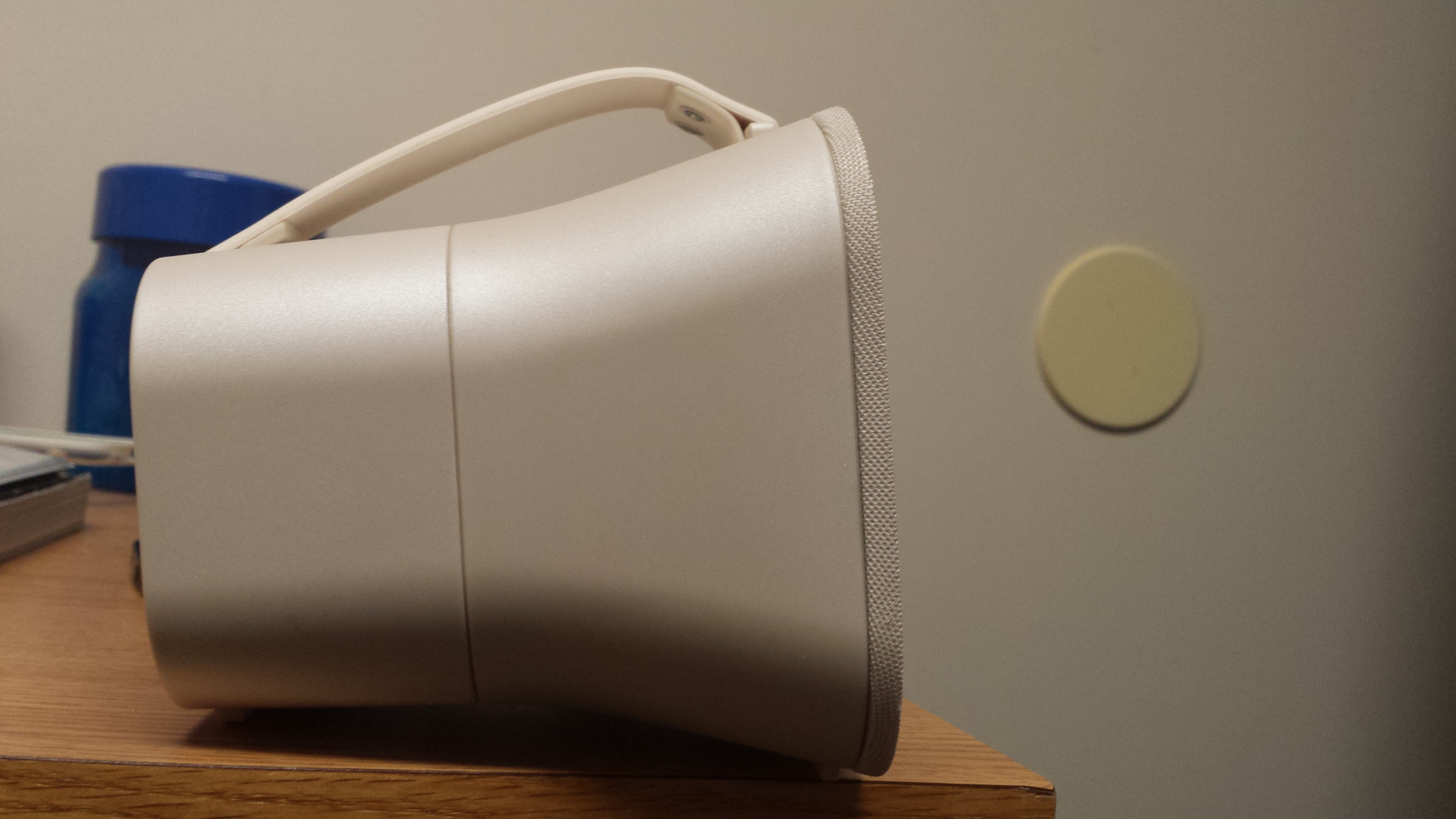 SuperTooth went the extra mile and threw in NFC-Bluetooth pairing capabilities. The basic idea is that the Disco 4 is NFC-capable, so you can just hold your NFC-enabled device up to it, and it will ask you to automatically connect to the speaker. This sounds like a brilliant idea, but it needs a bit of fine-tuning in practice. The first time I tried to use the NFC pairing, I spent several minutes waving my phone around the speaker like a lost wizard that just couldn’t get the spell to work. After a bit of frustration, I finally found the NFC sweet spot, which is at the top of the speaker, toward the back. In hindsight, there are diagrams in the quick start book that depict a smartphone being held at the back of the speaker to pair it via NFC. But who reads those pesky directions anyway?

Still, even after finding the NFC pairing spot, I was still unable to get my phone to pair via NFC on the first try every time. It always takes a bit of moving the phone around until that beep is heard. I’ll give props to SuperTooth for adding this feature, but it does slightly defeat the purpose if I can connect my phone to the Disco 4 faster by using standard Bluetooth pairing.

SuperTooth claims that you can pull a solid 12 hours of life out of the battery if you’re playing audio at low-to-medium volume, and 3 to 4 hours at full volume. After a few weeks of usage, those numbers sound pretty spot on. In my experience with the Disco 4, I could get several days out of a single charge, playing audio for a few hours here and there. Something tells me that users will either drain the battery in one long music-listening session or gradually over several days as they use the speaker occasionally. Either way, the battery life for the Disco 4 is more than reasonable considering its usefulness.

So here’s the real question: is it worth it? After spending some time with it, I have no hesitation in saying that the Disco 4 is worth every penny. Overall, I was very satisfied with every aspect of it (minus that pesky NFC pairing). It’s a light, portable speaker that offers great sound quality and is incredibly easy to use. At $49, it’s well worth the investment. It also doesn’t hurt that SuperTooth offers the Disco 4 in five colors: red, black, grey, white, and blue. If you’re interested, you can grab a Disco 4 directly from their website.