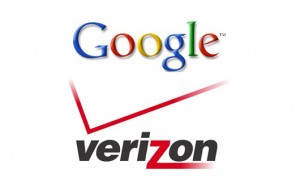 The webcast slated for today may not end up being the white-knuckle thrill ride we are all hoping for.Â  A press release has gone out today which essentially amounts to nothing more than a “strategic partnership” between Google and Verizon.

The two industry leaders will create, market and distribute products and services, with Verizon Wireless also contributing the breadth of its nationwide distribution channels. Consumers will be able to purchase products resulting from the collaboration in Verizon Wireless retail and online stores. – press release

We like the sound of products… plural.Â  We’re also fans of the last part of the release which states, “…the agreement will come to fruition within the next few weeks as Verizon Wireless introduces Android-based handsets.

Admittedly, our anticipation has somewhat waned upon hearing this.Â  Maybe things would be different if we weren’t so deeply involved in digging for clues and doing our part to spread the leaks and rumors.Â  Today’s announcement might be big news for mainstream folks and those who casually follow Verizon, but it’s highly unlikely that our average reader will glean anything new.Â  Not to worry though – we will still be watching the webcast and passing along any nuggets of hope.