Today, SwiftKey took the first step in the next generation of keyboards. The keyboard giant released Neural Alpha, the first version of their newest keyboard that will change the way predictive text works. SwiftKey is installed on about a billion devices worldwide, and using what they’ve learned, SwiftKey has developed the first “neural net” that will think along with you as you type to provide you with text suggestions that fit the context of your conversation.

SwiftKey’s current text prediction technology called “n-gram” suggests words based on common phrases and previous examples of your writing. This has its limitations because it can never truly think outside the box and predict something it hasn’t seen before. The current prediction technology never captures what the words you’re using truly mean. The Neural Alpha keyboard aims to change that by understanding sentence context and structure for “a more human touch”, the company states.

The technology behind SwiftKey’s new advancement is essentially machine learning. We see these types of technologies every day. Google’s Knowledge graph is one of the biggest examples. The Knowledge Graph understands the relationships between people, places, and things. In Google’s case, this helps them not only deliver targeted ads, but also improve things like meaningful search results. This is the reason two people using the same search terms will see different results.

[blockquote author=”SwiftKey”]Through machine learning based on enormous amounts of language data, SwiftKey’s neural model is able to meaningfully capture the relationship between words. It understands word similarity, allowing it to compare words on the fly. Within the neural model, words can be visualized in ‘clusters’, located at varying degrees of proximity to one another.[/blockquote]

Machine learning and technologies like SwiftKey’s Neural system have generally been reserved for huge server farms and networks that have the computing power to spare. The launch of a keyboard that employs this technology on a phone is a huge step forward since it’s a mobile computing platform instead of a server farm where things like battery life and processing power aren’t a concern. This is, in fact, the first time a language model technology has been engineered and launched on a smartphone platform. 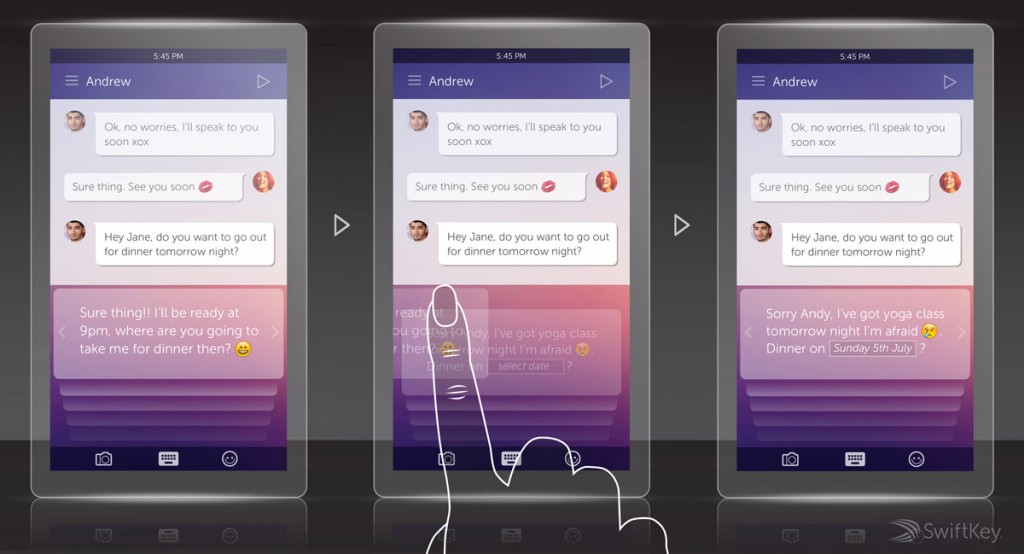 SwiftKey has no problem making history. They were the first to release a keyboard with a 3 word bar to predict your next word, and the first keyboard to reach this level of popularity. But, while SwiftKey isn’t leaving the past in the past, they are looking toward the future. “Rather than solely predicting your next word, we’re working hard on building a framework for the keyboard of tomorrow.” according to the company’s blog post. It’s not hard to imagine a keyboard soon that will be able to predict entire replies due to the context of the message received and the information SwiftKey has gained from its Neural net.

What do you think about SwiftKey’s newest advancement? Do you want machine learning to predict your next word or are do you prefer to do it yourself? What implications do you think this has for the future of mobile? Let us known down in the comments.