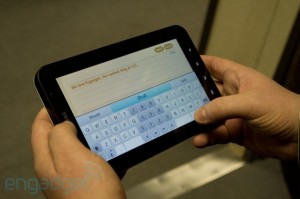 SwiftKey is an amazing keyboard. I was an alpha tester from day one, and it’s come a long way. It’s eye-pleasing, easy to use, and it just works. Well, the SwiftKey team has updated their keyboard, and they’ve included some awesome tablet functionality. There’s no noticeable difference when using the new version on an Android phone, but when used on a Galaxy Tab, for example, it’s easily up there with the best landscape keyboards for tablets. The guys over at Engadget went hands-on with SwiftKey on a Galaxy Tab, and they’re impressed.

Unlike other keyboards on a tablet, SwiftKey takes advantage of the screen size, and splits the QWERTY layout in half, putting the numbers in between. It’s a great idea, and I’m honestly surprised that I haven’t seen it before. (Thanks to our commenters who pointed out that Thumb Keyboard has used a similar split layout for months now.)

EDIT: JoeBraidWood on Twitter pointed out to me that the tablet-ready version isn’t finished yet. The Engadget post was just a sneak peak at what’s to come. My mistake. We’ll let you know when the new version is released.

EDIT 2: If you like the split keyboard concept, keep an eye on AndroidGuys for our upcoming review of Thumb Keyboard. 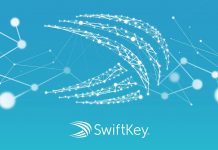 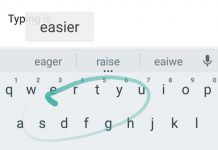