T-Mobile has been shaking the industry like crazy the past couple of years. I mean, they’re the reason that Verizon has gotten rid of contracts. Well, as John Legere has said many times, the Un-carrier isn’t showing any signs of slowing down as today they’ve announced video calling functionality from within the phone’s dialer. 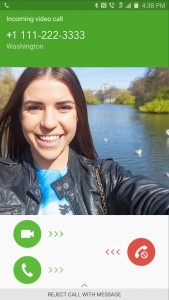 Dubbed T-Mobile Video Calling, T-Mobile is seeking to allow video calling functionality right out of the box. All it takes is placing a phone call, and then selecting either video call, or voice call. That’s it. Nothing more

Contacts that can receive video calls will have a small camera icon on them. Those that cannot receive them will have the same icon, but greyed out. T-Mobile says they’re working to make this functionality available to all, among all carriers. This will be accessible on both Wi-Fi and LTE, and T-Mobile says if you move from one of those connections to a slower connection, the call will transfer “seamlessly” to a voice call.

Currently this is only available on the Samsung Galaxy S6+ and Note 5 through a software update, and the S6 and S6 Edge will be available next week. T-Mobile plans to have three more devices available by the end of the year.

Video calling has been a functionality available for awhile, but being able to do this through a carrier will more than likely make the experience much easier, especially for those not as tech-savvy.

What do you think? Are you excited for this ability? Anyone received the update already and used it? Let us know in the comments below.