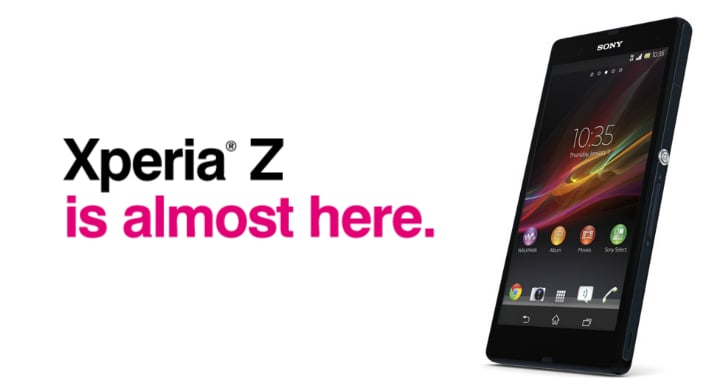 T-Mobile confirmed today that the Sony Xperia Z will soon be available as part of its Android smartphone lineup. A press release indicates that the UNcarrier will offer the sexy handset as part of an exclusive deal in the “coming weeks”. Pricing was not disclosed however we’re optimistic that T-Mobile will do the right thing and put it at or below the HTC One and Samsung Galaxy S4 stickers. Color options will be black and purple, however the latter is a limited time deal.

As a refresher, the Sony Xperia Z runs Android Jelly Bean and features a 5-inch 1080p HD Reality Display, a 13-megapixel rear camera, and a 1.5GHz quad-core processor. First announced back at CES 2013, the handset is also waterproof and dust proof.

T-Mobile is the only U.S. mobile provider of Sony’s flagship water-resistant smartphone

The Xperia Z packs the best Sony has to offer into a premium Android-powered smartphone. T-Mobile will offer the device on its Simple Choice Plan with no annual service contract plus unlimited talk, text and Web on a screaming fast, nationwide 4G network with 4G LTE rolling out across the country.

“With Xperia Z, we are thrilled to bring a breakthrough smartphone to T-Mobile, the breakout carrier in the U.S.,” said Timothy Hernquist, North America Vice President of Marketing, Sony Mobile Communications. “Xperia Z offers customers a beautifully designed, water-resistant premium Android smartphone ready to handle whatever life throws at it.”

Sony went with a stylish and durable physical design with unique technology, content and connectivity all bundled into the Xperia Z. A 5-inch 1080p HD Reality Display with Mobile BRAVIA® Engine 2 provides super brightness and clarity. The highly-durable design features tempered glass and anti-shatter film on the front and back and the highest levels of dust- and water-resistance2 (IP55 and IP57) in a premium smartphone. A 13-megapixel camera with Exmor RS™ for Mobile, the world’s first image sensor with HDR (High Dynamic Range) video for smartphones, delivers stunning photos and videos in any condition. And its STAMINA mode is designed to greatly improve battery standby time by automatically shutting down battery-draining apps when the screen is off.

The Xperia Z is expected to be available nationwide at T-Mobile retail stores, select national retailers and dealers and online via www.T-Mobile.com in the coming weeks. The smartphone will be available in a black finish and a limited-time only purple finish (while supplies last). For more information, visit http://t-mobile.com/Sony-XperiaZ.