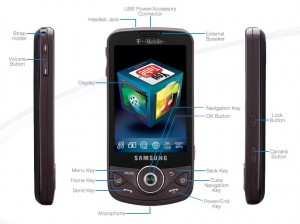 T-Mobile USA has officially announced their 4th Android handset as the Samsung Behold II.Â  A touch-only device, the Behold II is both Android-based and TouchWiz interface.Â  Starting November 18th, the phone goes on sale online and at T-Mobile stores nationwide, the phone will drop at $229 beginning Nov. 18, 2009.Â  We previously reported the phone for $199 so we feel compelled to clear that up.

This marks the first phone from T-Mobile to feature an AMOLED screen. The 3.2″ display allows for brighter and sharper images than traditional screens. Rounding out the specs are a 5 megapixel camera, GPS, Bluetooth, T-Mobile’s visual voicemail, 2GB microSD card with support for up to 16GB of external memory.Â  If you’re looking for processor and memory, the most we can say is that there is 200MB internal memory.Â  The chip is most likely the 528MHz flavor common in most Android phones.

“With its first-rate multimedia capabilities front and center, the Samsung Behold II adds an exclamation point to T-Mobileâ€™s already impressive Android lineup for the holidays,” said Wendy PiÃ±ero-DePencier, vice president, brand and calendar marketing, T-Mobile USA. “The combination of 3G speeds, its high-resolution touch-screen, and access to loads of entertainment features is sure to make the Behold II into a holiday hit.”

We have to say that this price is probably about $50 higher than we’d like to see it at.Â  It’s pretty hard to justify this kind of money for the Behold II when Verizon is selling the Droid at $30 less.Â  We know the rate plans are considerably better at T-Mobile, but is that enough to sway people?

How do you feel about the price?