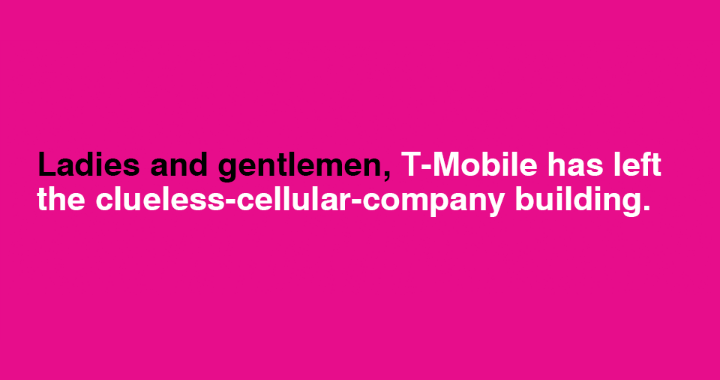 T-Mobile today officially kicked off the new UNcarrier era with a number of groundbreaking changes. Not only has the carrier done away with contracts and long-term obligations, they have also announced the first seven markets for its 4G LTE network. What’s more, T-Mobile has outlined which devices will be offering support for the 4G data connection.

Details from today’s event include the following:

NEW YORK — March 26, 2013 — T-Mobile has been talking the talk; now it’s walking the walk. The company, known for its “Un-carrier” attitude, today announced a series of moves to address consumer frustration with the unnecessary cost and complexity of wireless.

The moves include radically simplifying its lineup of consumer rate plans to one incredibly affordable plan for unlimited talk, text and Web; ensuring that customers never have to sign another annual service contract through T-Mobile retail outlets; and enabling customers to get the most popular smartphones whenever they want for the lowest upfront cost. T-Mobile also debuted its blazing fast 4G LTE network service in seven major metropolitan areas.

“These bold moves serve notice that T-Mobile is canceling its membership in the out-of-touch wireless club,” said John Legere, president and CEO of T-Mobile USA, Inc. “This is an industry filled with ridiculously confusing contracts, limits on how much data you can use or when you can upgrade, and monthly bills that make little sense. As America’s Un-carrier, we are changing all of that and bringing common sense to wireless.”

What could be simpler than one consumer rate plan?

Also, because T-Mobile is the only major U.S. wireless company to stop requiring consumers to sign annual service contracts, customers have far more flexibility with how they buy and use wireless devices. Traditionally, getting a good deal on a new phone has meant agreeing to an expensive service for two years. Upgrades typically weren’t allowed (without significant upfront costs) until contracts expired, and it was often difficult to ascertain the true value of a device offer because it was tied to a long-term annual contract.

With T-Mobile’s un-restricted approach, customers can purchase great devices, pay for them in affordable, interest-free monthly installments, and upgrade anytime they like — not just when their carrier says it’s okay. Customers can even use their own unlocked device. Monthly statements are easy to understand since the price stays constant from month to month, and the device cost is clear and unmistakable.

T-Mobile is moving at breakneck speed to expand the capabilities of its network.

T-Mobile is deploying the latest LTE technology, paving the way to LTE Advanced. T-Mobile’s 4G LTE deployment will complement its existing nationwide 4G network — which third-party tests show rivals or beats existing LTE networks — creating what T-Mobile expects to be the fastest 4G combination in the United States. T-Mobile 4G LTE devices will automatically and seamlessly transition to T-Mobile’s nationwide 4G where LTE has not yet launched.

To underscore its Un-carrier attitude, T-Mobile today unveiled a new tagline, “T-Mobile un-leash.” In tandem, the company will roll out a new nationwide advertising campaign, beginning with a television commercial tomorrow that plays off the Western film genre. The new commercial features a group of four cowboys in black hats riding into a dusty town to the terror of its residents. As three of the cowboys tell town folk they’re going to have to “do what we say,” the fourth, representing T-Mobile, switches to a magenta-colored hat and rides in another direction, saying he “just doesn’t want to do this anymore.” The 60-second ad spot closes with one cowboy musing “I’m gonna miss the guy” while our hero simply states “Oh, I’ll be around.”

This press release contains forward-looking statements that reflect the current views of Deutsche Telekom management with respect to future events. These forward-looking statements may include statements with regard to the expected development of revenue, earnings, profits from operations, depreciation and amortization, cash flows and personnel-related measures. You should consider them with caution. Such statements are subject to risks and uncertainties, most of which are difficult to predict and are generally beyond Deutsche Telekom’s control. Among the factors that might influence our ability to achieve our objectives are the progress of our workforce reduction initiative and other cost-saving measures, and the impact of other significant strategic, labor or business initiatives, including acquisitions, dispositions and business combinations, and our network upgrade and expansion initiatives. In addition, stronger than expected competition, technological change, legal proceedings and regulatory developments, among other factors, may have a material adverse effect on our costs and revenue development. Further, the economic downturn in our markets, and changes in interest and currency exchange rates, may also have an impact on our business development and the availability of financing on favorable conditions. Changes to our expectations concerning future cash flows may lead to impairment write downs of assets carried at historical cost, which may materially affect our results at the group and operating segment levels. If these or other risks and uncertainties materialize, or if the assumptions underlying any of these statements prove incorrect, our actual performance may materially differ from the performance expressed or implied by forward-looking statements. We can offer no assurance that our estimates or expectations will be achieved. Without prejudice to existing obligations under capital market law, we do not assume any obligation to update forward-looking statements to take new information or future events into account or otherwise.

In addition to figures prepared in accordance with IFRS, Deutsche Telekom also presents non-GAAP financial performance measures, including, among others, EBITDA, EBITDA margin, adjusted EBITDA, adjusted EBITDA margin, adjusted EBIT, adjusted net income, free cash flow, gross debt and net debt. These non-GAAP measures should be considered in addition to, but not as a substitute for, the information prepared in accordance with IFRS. Non-GAAP financial performance measures are not subject to IFRS or any other generally accepted accounting principles. Other companies may define these terms in different ways.