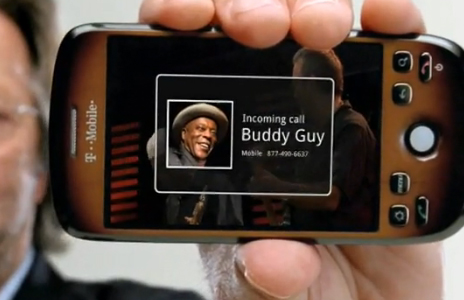 After teasing us with the news of a modified myTouch 3G some months back, T-Mobile has officially announced the Fender Limited Edition model is due on January 20th.Â  You might be asking why one might want to buy this version over the traditional model.Â  Well, it’s not just a fancy guitar-like case that makes the Fender model appealing.Â  There’s a handful of music-related features included.Â

The Fender Limited Edition comes with a 16GB microSD card, a 3.5mm headset jack for headphones and a considerably better music player.Â  This music app was designed by HTC and offers a more intuitive, and overall better, music app with an interface that allows for toggling between different views.Â  Another nice touch is the ability to create ringtones from songs that are playing.Â  Oh yeah, did we mention that it comes preloaded with doubletwist?

doubleTwist is a free software application that enables users to easily manage and sync their music,Â videos and images… automatically finds music on the computer… allows customers to import their iTunes playlists.Â  An exclusive T-Mobile version of the software will be pre-loaded on the new limited edition…The software offers a sleek, intuitive interface for syncing and managing music and other media. – press release

If you’re an already existing T-Mobile customer, you’ll be happy to know that the carrier will be offering the customized version of doubletwist for all T-Mobile Android devices!

Fun Fact: You can actually call “Buddy Guy” at the number listed, but it’s just a T-Mobile number to talk about the phone.