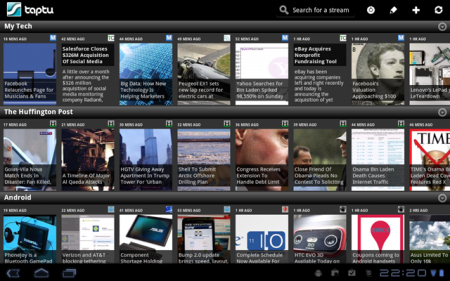 News and RSS reader Taptu just dropped version 1.4 in the Android Market bringing a completely new experience with it. Designed with 3.0 tablets in mind, Taptu takes advantage of the Fragment API, splitting things up nicely across large screens. The new release offers users a handful of Android-exclusive features including two color themes, full screen reading, and Instapaper integration. Also, the 1.4 version lets users import up to 100 RSS feeds from their Google Reader account, whereas previously it only allowed 30 feeds. Hit the break for the press release and download links!

CAMBRIDGE, ENGLAND & DENVER— May 5, 2011 — Today Taptu, a social media and mobile technology company, is announcing the release of Taptu for Android tablets, version 1.4 of its free Android application that aims to change the way tablet users connect with the world. Taptu is the pre-eminent next generation news service – built by journalists and scientists, and from the feedback of hundreds of thousands of consumers.

Taptu is dedicated to a cross-platform approach, building this new version from scratch rather than just porting an iOS version to Android. Taptu 1.4 for Android tablets adds performance enhancements to all Android devices and has made full use of Honeycomb’s APIs to provide an unparalleled tablet experience.

“We’re not trying to mimic the same features across platforms, but rather we are building the best Android tablet experience from the ground up,” said Mitch Lazar, CEO of Taptu. “After the millions of downloads of our first generation apps on iPhone and Android, we listened to our customers and further analyzed how they want to consume their news, manage their social networks and mix their favorite content sources.”

Using the Action Bar API, the Taptu app logo, for instance, is clickable and sends you back to the main screen. Transitions within the app are smoother, while scrolling is fast and effortless as a result of hardware acceleration. Lastly, the Fragment API makes it easy to use the same code for both phones and tablets, meaning the features of the app are also available on Android phones.

Taptu is already known for letting you ‘DJ the News’ by mixing stories on topics that interest you into your own streams. Now Taptu is also integrating new features into the Android app not available on the iOS app. Using the Instapaper API, Taptu gives users the ability to archive articles to read later via their Instapaper accounts. With the new Taptu themes, users can also switch between dark font on a white background, or white font on a dark background— allowing customers a better option for reading during the day or at night. Taptu 1.4 also takes advantage of the larger tablet screens with the ability to full screen article cards.

Taptu now lets any android device import up to 100 RSS feeds from Google Reader, which is more content sources than many competitors support, period. Combine this with the ability to integrate Facebook and multiple twitter accounts and Taptu becomes the most powerful service on Android tablets for both discovering and sharing news.

From the biggest stories of the week to your individual passions, Taptu allows you to keep everything organized in a clean and intuitive design. The company’s search engine heritage, allows Taptu to go beyond simple RSS feeds, by actually recommending sources, and enabling consumers to discover new content. Taptu’s search expertise and algorithms also solves showing customers the same story over and over, eliminating duplication seen on other readers. 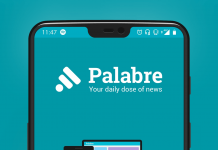