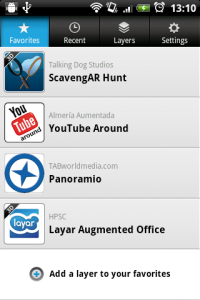 Since its debut, Layar has been one of the premier augmented reality applications for Android.  Things do not simply get incrementally better with each release, the feel like they get exponentially better.  Such is the case with the beta release of 5.0 of Layar.  I came across a post on their blog from earlier this week which details the features found in the latest batch.  If you’re one of those people who like to be on the cutting edge and testing things before they come out, you’d be wise to check out 5.0 beta.  Details include better integration with social networking, improved animations and graphics, and a new emphasis on full layers rather than spots.