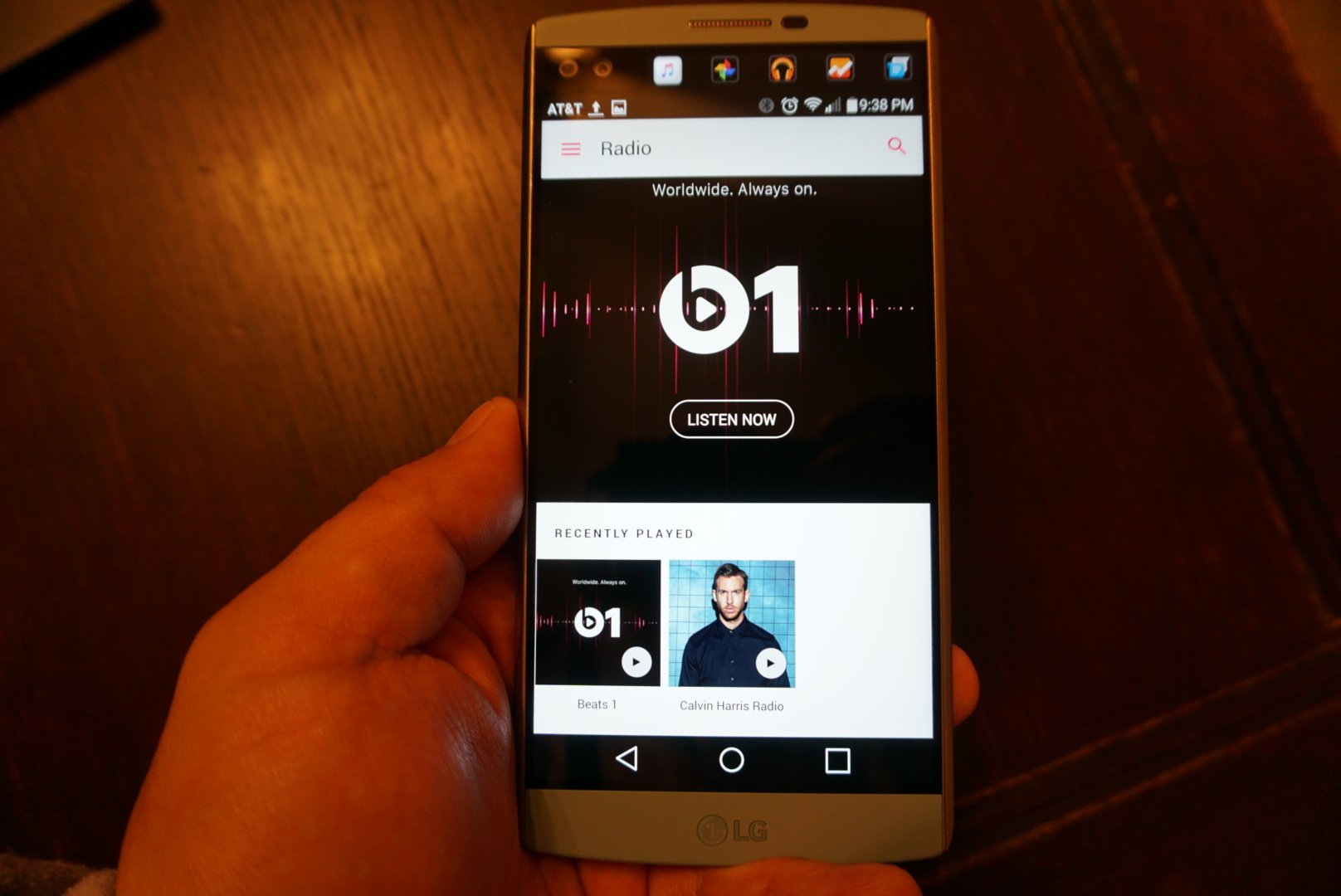 Apple is notorious for locking down its software and ecosystem by keeping things all to themselves. Apple doesn’t readily share its software and for the most part and has only released three apps into the Google Play Store, one of which is a very poorly two star rated Move to iOS app. A change occurred last year when Apple decided to release its music app, in beta form, to Android users where it offered a free 90-day subscription.

Naturally being a huge fan of music, and intrigued by Apple joining Android, I decided to give the Apple Music app a try. And for the last month I’ve realized the app is representative of what an iPhone is – good looking, over-priced, and definitely lacking in features. 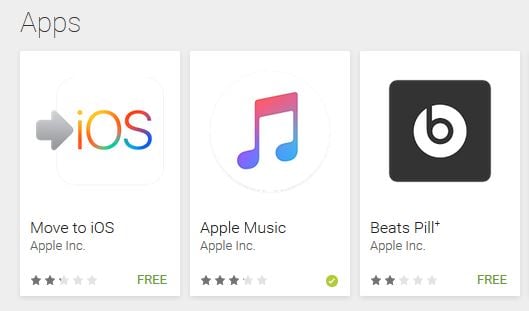 Apple Music was released to the Google Play Store in November of 2015. Apple has decided to call it a beta release, seemingly as an excuse to make up for its shortcomings on Android devices. At $9.99 Apple Music is identically priced to Google Play Music, but offers a smaller library at 30 million songs to Google’s 35 million.

Google and Apple both released Family Subscription plans last year, where you can pay just $14.99 for unlimited music streaming and downloading for a household of six. Pathetically, if you do subscribe to Apple Music on Android and want to join as a family, you’ll need to a Mac OS computer or iOS device.

In order to use the Apple Music App, you will need to create an Apple ID just to get started. The app will not let you past the sign in page to access free music without going through the painstaking process of dropping in your credit card information just for a free trial. You will need to give your full address, credit card information and phone number just to be able to listen to music. And you cannot use other payment services like your Google Wallet or Paypal. Just to start using the app is a painful process.

Just like the iOS app, Apple Music for Android is full of musical recommendations, human-curated playlists and radio. You can create your own playlists and access music you’ve purchased through iTunes on the My Music page. You can download songs, playlists and full albums for offline listening when you don’t have a connection. The Connect tab lets you follow your favorite artists and see photos, songs and other updates they share. 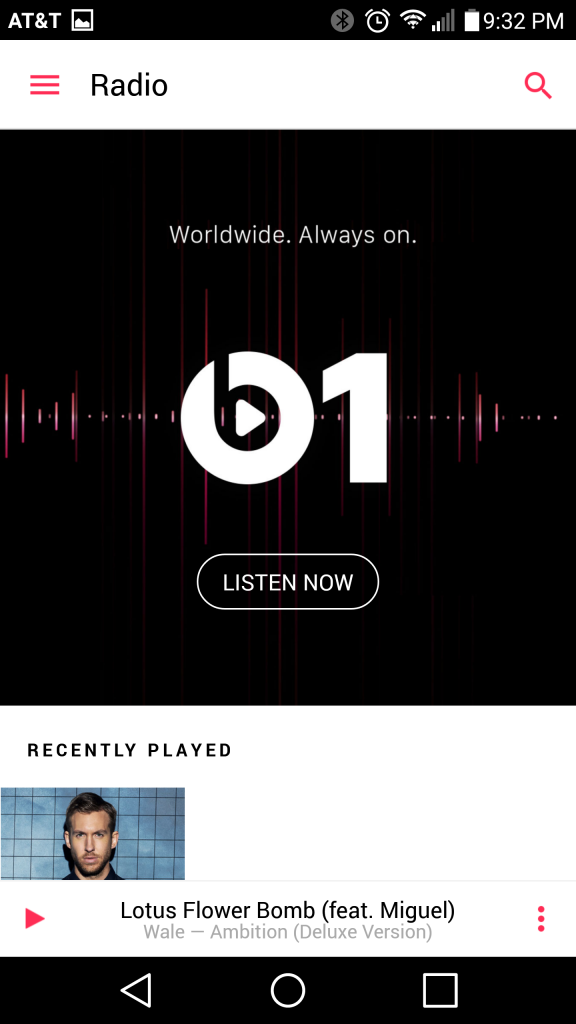 Like other music streaming apps, Apple Music does have human-curated playlists and radio stations. And like other subscription based services, you are free to create your own playlists and download music for off-line use.

I am a subscriber to TIDAL which offers true HiFi audio that streams at much higher bit-rates than anything else available. The main downside to TIDAL is its much smaller library of music.

I’m also a subscriber to Google Play Music which offers a family plan that doesn’t require an iOS device, includes a free subscription to YouTube Red and allows me access to over 35 million songs. Being a subscriber to both of these services gives me a good foundation for what a good music streaming app should be.

When I first installed the Apple Music app on my Android device, I was hoping to get started by just downloading the app. I was annoyed that I had to go through the entire sign-up process – luckily I had an Apple ID from my iPhone days, but I still had to type in all of my information again like my address and credit card information. I didn’t understand why I couldn’t just login with my Apple ID and get going. The sign process is downright cumbersome.

Moving past the sign-up process and getting into the app was a pleasant experience. Apple Music, while being a tad busy looking, is still really good looking. The images it uses are very clear and the layout looks great. 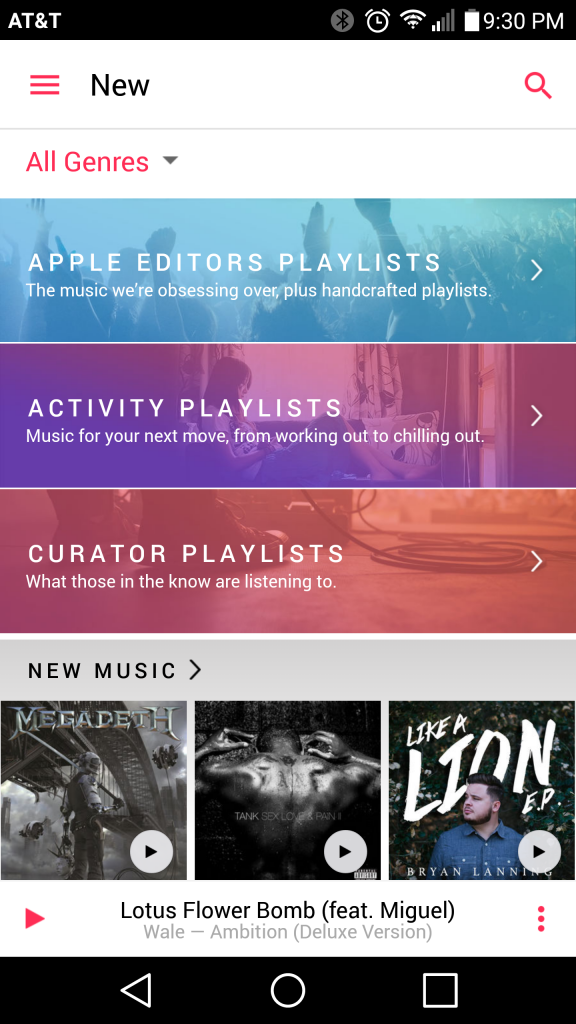 Once I started to use the app I noticed that the app severely lagged at times when trying to load my downloaded playlists. It didn’t do it all of the time, but you can definitely tell Apple Music for Android is still in beta form. I experienced app crashes too – I gave the app a spin on my Nexus 6P, Note5 and LG V10 so there would be no performance issues blamed on hardware. I was also very disappointed to learn that I could not stream music to my Chromecasts I have setup on my TV and home stereo system.

A feature that I am a huge fan of on all mobile devices is the ability to use voice control, especially while driving or when cooking. Voice control is an absolute must have feature. Apple Music for Android is missing any voice control or the ability to even search the library with voice commands. You can’t even use Google’s voice recognition system in the Apple Music app which is mind boggling.

When it came to music, I could select and listen to most songs that I already have on my other subscription services. In that sense, Apple Music performed as described where it at least delivered music to my smartphone.

Other than the superficial aspect of the app, Apple Music failed to win me over in anyway. Instead it just validated what I think of the Apple iPhone – it looks great, does a “good enough” job, lacks features, and is highly over-priced.

Apple Music for Android is a pathetic attempt by Apple for sharing its software with Android. It lacks features, is highly over priced for what you get, and offers no additional features over Google Play Music or Spotify. You don’t even get music videos with a full subscription to Apple Music, which is a feature found on other music streaming services. Apple’s music app is so bad it almost seems like it was intended to be that way as an insult to Android users. I honestly hope Apple sticks to keeping its software to themselves and staying within its own ecosystem if its going to give us inadequate attempts like Apple Music.

For now, I will be cancelling my subscription before Apple charges me $9.99. I do not recommend the Apple Music app.