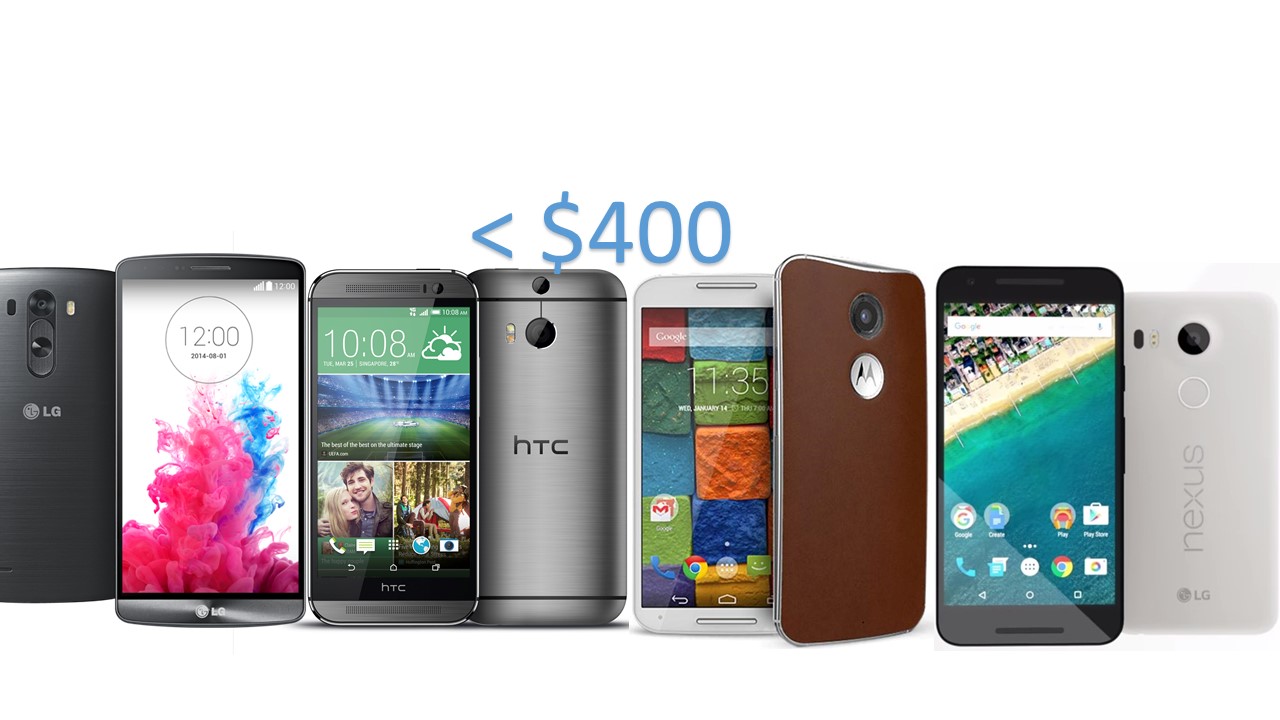 Even though we’re starting to see some high-end smartphones launch at very affordable prices unlocked, the vast majority of “flagship” smartphones can kill your wallets if you try to buy them outright. However, if you’re in the market for a great smartphone at a great price, the smartest move might be to buy last year’s flagship phones which frequently go for incredible prices from third party venders on Amazon and Ebay. While these phones don’t have the latest and greatest specifications of today, the differences between them and their current iterations are minimal, and you shouldn’t worry about them being outdated.

It’s also worth noting that these venders on Ebay and Amazon can be identified as legit or not by the customer feedback on Amazon and positive ratings on Ebay. Most of the time the phones sold are either manufacturer refurbished or brand new. Manufacturers can also directly sell these older phones on Ebay or Amazon, such as Motorola currently selling the Nexus 6 for $349.99.

As stated above, Motorola is currently selling 2014’s flagship Nexus phone for almost half the price it originally sold for last year on Amazon, and we’ve seen other third party venders on Ebay going as low as $299 unlocked for this incredible phone. If you want to pay for a mint-condition Nexus 6 with the original box, Motorola’s website is still selling it for a more expensive price of $499. Buying this phone for anything under $400 is a steal if you ask us, as this Nexus still packs a punch in just about all hardware categories, and currently runs the latest Android with direct updates from Google. The longevity and relevance of this phone alone make it worth the current price.

While being about a year and a half old, the LG G3 still remains relevant today as one of the most popular LG handsets to have ever launched, and one of the first smartphones to ever include a stunning Quad-HD screen. The G3 is still being updated by LG with the promise of being updated to Android 6.0, as it’s currently being tested for a release in Poland in early 2016. One of the best features of the G3 is the screen to body ratio, as the phone is quite compact and easy to hold for having a large 5.5 inch screen. The phone can easily hold a charge through the day thanks to its 3,000mAh battery and takes really nice pictures with its built-in laser auto-focus abilities.

The Galaxy S5 still holds its own as a very tempting smartphone for many people. Samsung is still actively supporting the smartphone with software updates, and there are several features of this phone not found in their latest Galaxy S6. First of which is the phone’s IP67 water resistant rating, allowing the phone to be submerged in one meter of water for thirty minutes. The second feature not found in the Galaxy S6 is the micro-SD expansion slot allowing for more storage than the devices internal limitations, something that many fans were disappointed to see absent this year. Lastly, the ability to swap out the phone’s battery was missing in the S6, providing even more reason to stick with the Galaxy S5. On top of those features, the S5 has a vibrant, 1080p Super AMOLED screen, more battery capacity than the Galaxy S6 and a great camera that still holds even for today’s standards.

Google’s very recent Nexus offerings include the Nexus 5X, the more affordable option that offers a stunning camera, fast hexa-core processor and fingerprint scanner unlike any other smartphone. The best part? The phone currently goes for $329.00 with free shipping straight from Google themselves. I had the chance to review the Nexus 5X, and while it wasn’t my favorite phone I’ve ever owned, it’s an extremely compelling device for the price. On top of the great hardware mentioned above, this device will be getting updates from Google every month, and will always be running the latest version of Android for at least the next couple years.

What was considered the best Nexus phone ever made, the 2013 Nexus 5 offered the latest processor, a five inch 1080p screen, an 8-megapixel camera with optical image stabilization and very minimal design all for a reasonable price. Today, the Nexus 5 is no longer in production or being sold from LG or Google, but third party retailers are still offering it. Being a Nexus device, this phone currently runs the latest Android version (Marshmallow) and performs like almost any high-end phone being released today. As for the future state of the device, it is not known how much longer Google will support the phone themselves, as their time frame for Nexus updates usually last two years, but it currently runs the most stable and smooth version of Android yet and it one of the best optimized phones I’ve ever used. This phone is still one of my favorite phones to have existed.

Launching just this past fall and starting at $399, the new Moto X Pure Edition offers a 5.7 inch Quad-HD display and is customizable through Motorola’s online Moto Maker, giving the customer tons of freedom to design their phone. This device is a very worthy successor to last year’s Moto X 2nd gen. if you’re comfortable with big phones. The Moto X Pure Edition offers an Android experience very similar to stock Android, so you shouldn’t expect the bloatware that other manufacturers tend to include. Since this phone is almost brand new and includes some of today’s best hardware, you can expect the best value out of any smartphone currently listed in this article so far. For fans of wood designs, different colored rubber options or people who want the luxury feel of leather, check out the Moto Maker page to design your Moto X.

The second iteration of Motorola’s Moto X series offered unparalleled customization with a price lower than most flagship smartphones. Like the new Moto X Pure Edition, customers have the ability to pick which back cover they want from a range of colors, wood and leather materials and the color of the speaker grills on the front. As a bonus, customers can even add a custom engraving to the back and add a special greeting when the phone boots up. While Motorola is still updating the unlocked version of this phone, they have decided to stop updating carriers versions. This caused quite a bit of distrust within fans and owners of this phone, as it is only a little over a year old. We do not recommend you buy the carrier version of this phone because of the discontinued support. However, Motorola is still currently selling the unlocked phone through Moto Maker for an amazing deal of $299 for the 64GB option only through December 18th. This price for that amount of storage, a high quality build and near-stock Android experience make this a very worthy purchase.

Considered one of the best phones ever made by HTC, the One M8 is the second phone in their One (M) series and offers a full metal body construction, dual-rear camera for faster focus and dual front-facing Boomsound speakers. This is an incredibly fast phone that flies through every day tasks thanks to HTC’s great software optimization. While the two cameras on the back might be gimmicky, the phone does capture photos very fast and can be converted into 3D photos. Boomsound on this device still provides the highest quality speaker sound you will find on any smartphone today, and thanks to its five inch screen, you can easily hold it with one hand. HTC is still updating this phone, with Android Marshmallow to appear on it in early 2016. The One M8 is still a very well-rounded smartphone and is even better in some categories than its successor, the One M9.

We are not responsible for any purchase you make through the suggested retailers and advise reading through descriptions before deciding to buy.

Questions or comments? Sound off in the section below!