The Case For and Against the G2 Rumor

There’s a pretty big news item getting passed around today regarding an alleged G2 handset coming from T-Mobile in January.Â  Depending on who you ask, you’ll get arguments for or against the case.Â  I’d like to shed light on both sides and let you form your own opinions.

Here’s a few rumored specs we’d like to share with you.Â  These are a few of the differences from the G1 currently available:

There’s a ton of specs available, but these are the few that stick out which are different from the first device to carry Android.Â  Some of these might are simple software updates while others require new network capabilities.Â  T-Mobile doesn’t offer video messaging – they barely offer 3G.Â  One thing to point out is that there is no mention of the hardware manufacturer.Â  It’s rather simple to assume that HTC will be behind this, but we know about assumptions.

There’s no mention of a keyboard or input method aside from the touch screen, but that’s not to say that the cupcake release of Android couldn’t take care of it with a soft keyboard.Â  We knew all along that one of those was coming in early ’09 anyhow.

The specs read like a geek fantasy when you couple that with the upcoming Android features.Â  Whether or not these are what ends up on the next Android phone from T-Mobile remains to be seen.Â  Trust us, we’d all love to see it… but none of us are holding our breath.

What is it that has us convinced that there may actually be a true G2 coming sooner than later?Â  It’s simple;Â  T-Mobile applied for a trademark for G2 on October 30th. This is obviously after the G1 was released.Â  So why put so much creed in this one little finding?Â  For starters, we were able to find the official logo to the G1 there weeks before the release.Â  Second, because it’s considered “live” and not dead. 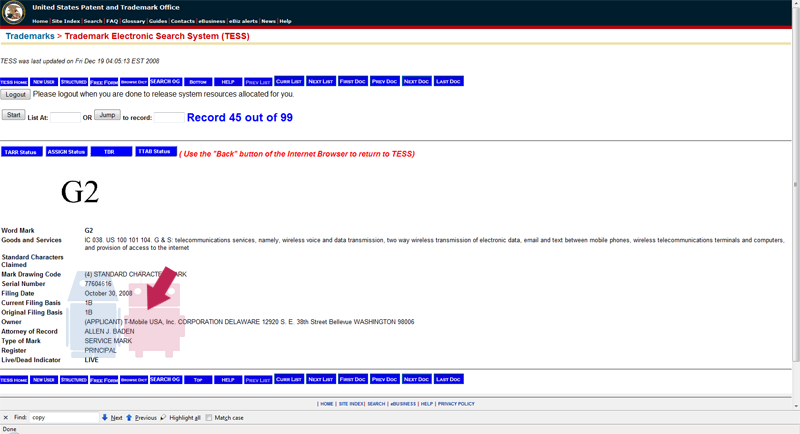 Don’t be surprised by what happens and shows up on sites out of nowhere.Â  If history has taught us anything, it’s that anything is possible.Â  We truly could be around 6 or so weeks away from the next Android handset.Â  Just because it wasn’t broken on a major news source, doesn’t mean it won’t happen.

Don’t forget that T-Mobile owns the domain rights to T-MobileG1.com up through T-MobileG5.com.Â  Let’s not discount the fact that T-Mobile has to know what the general feedback is around the G1 – it’s not as polished, sexy, or sleek as people generally hoped.Â  Maybe the G2 is being fast-tracked to help keep the interest.Â  Maybe it’s to beat the next carriers to the punch with their device.

On the Other Hand

Why wouldn’t a G2 be coming in January?Â  One, it would be coming directly on the heels of the G1.Â  Does anyone really think T-Mobile would spend all that money and time marketing the G1 so much and then move right on?Â  Another point to bring up would be to ask why they wouldn’t just wait a few more months and go directly to the new device and call it the G1.Â  It would be a heck of an impact to debut Android at the same time as video calling, wouldn’t it?

It’s pretty easy to dismiss rumors and toss them aside, never mentioning them again.Â  It’s also easy to point at things and say “I told you so.”Â  What is tough, however, is being able to stand up and say you were wrong.Â  I did that very thing with the G1 back in the summer.Â  I couldn’t believe my eyes when I saw TmoNews break the September pre-order deal, even writing a piece on how it wouldn’t be so.Â  A few weeks later, I ate a piece of humble pie.Â  One thing is for certain – we’ll all be watching this as it develops.Â  If it ever does.

I’m not necessarily for or against CellPhoneSignal’s leak and I’m certainly not in a position to judge its merit.Â  As much as I would like to see any new Android handset on the market, I am happy to wait and see what other vendors have in mind.Â  If this happens as rumored, kudos to those guys for bringing us all a little extra Christmas cheer.

What do you think of the rumor?Â  Are these the specs of the next Android handset?Â  Is T-Mobile really going to launch a new Android phone in January?

Motorola gets the new year off and running with phone sales that have discounts as steep as $400. Here's what's on offer for a short time.
Read more
News and Rumors

Leaks of the Samsung Galaxy S22 series have been popping up over the last few months. As...
Read more
News and Rumors

NVIDIA announced today that they are rolling out the SHIELD Software Experience Upgrade 9.0 to all NVIDIA SHIELD TVs. SHIELD...
Read more