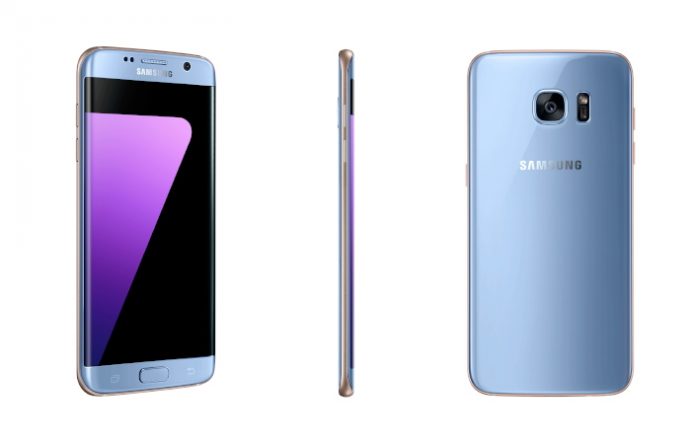 Samsung is doing everything it can to stay on top after the Galaxy Note7 scandal. We previously brought you the news of Samsung’s efforts to limit the environmental impact of the returned Note7s and a discount program supposedly coming soon for affected customers.

But in the meantime, Samsung is still trying to promote the Galaxy S7 and Galaxy S7 Edge. The devices remain two of the best phones on the market even though they were released eight months ago. Samsung is trying to stave off people getting bored with the S7 Edge by releasing a brand new color- Blue Coral.

You may remember the beautiful new color combination from the Galaxy Note7. It debuted on that device and now that we can no longer get our hands on one, Samsung is making efforts to Note-ify the S7 lineup. We’ve seen software updates to add Note features to the S7 and S7 Edge like porting over the Notes app and adding some edge features only found on the Note. These may have been planned updates, but they took on some special meaning as Samsung looks to try and keep customers from jumping ship to other OEMs.

Also of note in the leak were two more devices added to T-Mobile’s inventory. The SyncUp Drive is a car accessory that connects to your car to give you diagnostic information and creates a WiFi hotspot and the Gear S3 Frontier is a smartwatch from Samsung. Both the devices are listed as New Products alongside the Blue Coral S7 Edge and the Alcatel OneTouch Pop 7 LTE, a previously announced budget tablet.

T-Mobile hasn’t announced when you’ll be able to get your hands on the Bleu Coral Samsung Galaxy S7 Edge, but if AT&T’s schedule is any indication, it should be this month. AT&T is already taking pre-orders and lists expected ship dates around November 14. You can also check out our list of where you can pick up a Samsung Galaxy S7 Edge if you’re looking for a good deal.

Are you on the hunt for a new smartphone? Have you considered T-Mobile as your potential service provider? If you've answered yes to those questions, you're definitely in the right place. We're here to make the task of buying...
Read more

TCL introduces its newest handset, the Stylus 5G, for T-Mobile and its prepaid brand, Metro. Learn more about the budgeted device.

T-Mobile gives potential subscribers a chance to test out its 5G Home Internet service with 15-day trials. Learn more about the new offer.

T-Mobile and its prepaid brand, Metro by T-Mobile, will soon offer the OnePlus Nord N20 5G as part of their entry-level phone...
Note: Select outbound links may include affiliate tracking codes and AndroidGuys may receive compensation for purchases. Read our policy. As an Amazon Associate we earn from qualifying purchases.