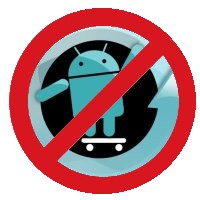 Folks all over the Androidosphere are freaking out about the cease and desist order Android modder extraordinaire Cyanogen reportedly received from Google.

It’s disappointing, but honestly, not terribly surprising. Let’s all step back, take a couple deep breaths, and count to ten. Feel a little better? Okay, now let’s look at what’s going on.

First, Google isn’t being evil.Â The C-and-D is about apps like Gmail and Maps, not Android itself.Â While Android is open, their core apps are not, and they have a legal obligation to protect their intellectual property. If they are aware of infringement and let it slide, they start to lose the right to protect it elsewhere.

And CyanogenMod isn’t necessarily dead. Yes, the website is down for now. Smart move, that, to show Google that he wants to be cooperative. Now he and Google can work something out. What might end up happening? This is speculative, but some possibilities are:

Is it possible this will all end in tears? Sure. But let’s give both Google and Cyanogen the benefit of the doubt and see what happens.

What do you think about the whole hubbub? Freaking out? Wondering who or what “Cyanogen” is? Let us know in the comments.

Edit: Cyanogen says “the website is down because of the Slashdot effect.”