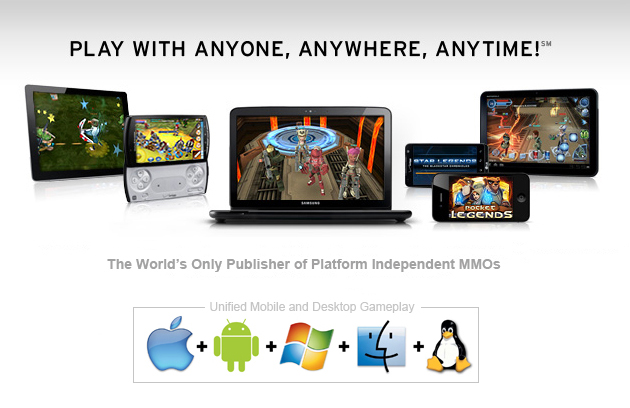 One of our favorite developers, SpaceTime Studios, has finally completed their goal of allowing users to play their MMOs together, regardless of platform. I’ve been a strong proponent of platform independent gaming for some time now and have always seen this as the future of gaming. With most devices now fully capable of running even the most graphic intensive games, and data speeds reaching unprecedented milestones, there is no longer a need to be restricted to playing on a specific device/platform. While most major video game companies are going to disagree, one gaming publisher getting it right is Spacetime Studios.

Spacetime Studios has removed the barriers that prevent us from playing together in a truly unified gaming ecosystem. By hosting their game on a single global server, they have made it possible for “someone in the U.S. to play on their iPhone with someone in Germany on their Android tablet and someone in South Korea on their computer” — anytime, anywhere. That’s what gaming is all about!

Using technology powered by Spacetime (Spacetime Studios’ proprietary technology, not the mathematical model that combines space and time into a single continuum), Spacetime Studios has made it possible to play their immensely popular MMOs, Pocket Legends and Star Legends: The Blackstar Chronicle, on almost every Apple and Android mobile devices as well as Windows, Mac and Linux computers. If you’ve never played one of the SS’s MMOs I highly suggest downloading them today. They are highly addictive and provide endless hours of gratifying gameplay that can be stopped and picked up at any time, and now — on almost any device.

For more information on Spacetime Studios or to download one of their popular MMOs, follow the links below. You’re now on your way to experiencing first hand, the future of gaming.