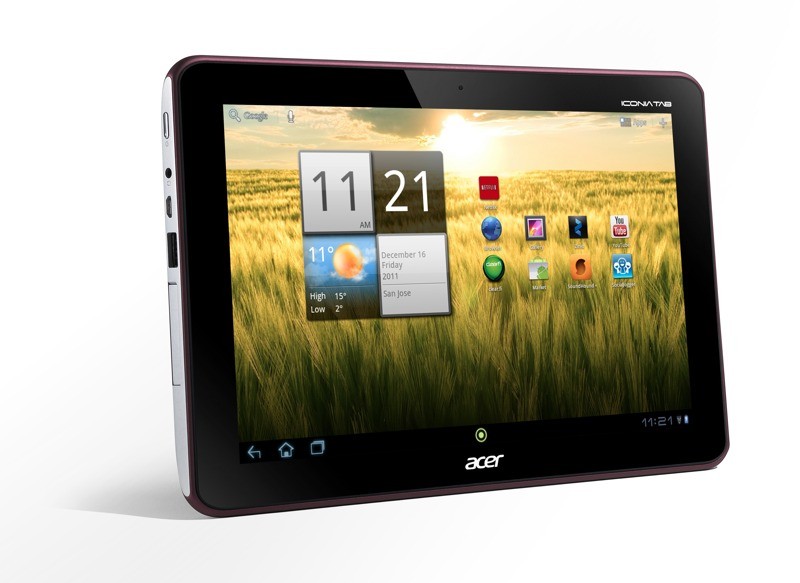 In the hubbub of price reductions, fire sales, sub $200 tablets masquerading as E-Readers, $100 dollar Chinese knockoffs, and other various developments making us go tablet crazy, I must say that this is something that, while it would be quite easy to overlook, it stands out from the rest after a second glance.

Acer will, in January, be adding the Iconia A200 to the already popular Iconia clan. Let’s get to the best bits first: it boasts a full 10.1-inch HD display with a 1280 x 800 resolution, Honeycomb (with the promise of an ICS update shortly after launch), a 1GHz dual-core Tegra 2 processor, a 2MP front-facing camera, 8 hours of battery life, a MicroSD card slot, and the full-sized USB port found on the other members of the Iconia family. I can’t tell you how mind-bogglingly useful having a USB port on a tablet is.

The A200 will also be shipped with a bit of Acer bloatware, namely Acer Clear Fi (their own media sharing software) and something called Acer Ring, which is meant to help users get used to their apps.

So what do you guys think? Personally, I’m psyched to see an affordable tablet with such potential landing at the beginning of this year, and at a price that your New Year’s resolved budget will allow for. Anyone planning to pick one up when it drops? Leave a comment below! The full press release can also be found below.

[spoiler show=”Show Press Release”]Acer Expands Popular Tablet Lineup with Iconia Tab A200, A Full-Featured HD Tablet at an Attractive $329 PriceSAN JOSE, Calif., January 5, 2012 – Acer America today announced availability of the Iconia™ Tab A200, the latest addition to Acer’s line of full-featured Android tablets. The new 10.1-inch Iconia Tab A200 is a portable activity hub for gaming, e-books, movies, music, photography, social networking and more. Offered at the attractive price of $329.99, the Iconia Tab A200 will be available to U.S. customers on January 15.

The new Acer Iconia Tab A200 tablet enables customers to interact with and enjoy technology in ways that are both truly natural and exciting. Loaded with the latest edition of Android™ Honeycomb™ 3.2 operating system, the Iconia Tab A200 is user-friendly and extremely interactive with resizable app widgets and fun features the whole family can enjoy. The Iconia Tab A200 also comes with a free upgrade to Android 4.0 (known as Ice Cream Sandwich), which will be available in mid-February.

“The Acer Iconia Tab family of tablets is an excellent example of Acer’s ability to deliver high-performance, full-function mobile devices at unbeatable values,” said Eric Ackerson, senior product marketing manager for Acer America. “Acer brings the Iconia Tab A200 to consumers at an affordable price, without making sacrifices on key tablet features such as expansion, connectivity to other devices, HD displays and cameras.”

High-Quality Performance for Hours of Fun
Sleek and easy to hold, the Iconia Tab A200 weighs 1.5 pounds. The tablet is wrapped in a slim, titanium gray-colored casing, with an eye-catching patterned back side, which is soft to the touch. On the front, the A200 showcases a beautiful HD multi-touch display featuring crystal-clear 1280 x 800 resolution for an outstanding viewing experience.

Made especially for multimedia enjoyment, the Iconia Tab A200 packs hardware and apps for loads of fun. The tablet provides an enhanced level of performance with its NVIDIA® Tegra™ 2 dual-core mobile processor and integrated GeForce™ GPU that allows users to enjoy HD gaming, 1080p video, Flash-based applications, faster browsing and multitasking.

Gamers of all ages will enjoy the preloaded Tegra Zone Android app, which allows users to search and download the best Android games that are optimized for NVIDIA Tegra powered tablets. The Iconia Tab A200’s fast gaming experience is also supported by a six-axis motion sensing gyroscope, essential for high-precision gaming so actions and animations are more correctly performed.

Users can enjoy up to eight hours of cable-free battery life , providing endless hours to surf the web, watch movies, play games and read e-books, far from the nearest electrical outlet. The Iconia Tab A200 comes pre-loaded with apps like Kindle for countless reading selections and Netflix for instant delivery of movie and entertainment titles. One tap on the Android Market allows users access to thousands of downloadable apps.

Packed with Practical and Fun Features
Offering superior expansion and connectivity, the Iconia Tab A200 has a full-size USB 2.0 port for hooking up other devices and a MicroSD slot and micro-USB port for passing data. A two megapixel front-facing web camera enables face-to-face chats or quick snaps for still photos. For an enhanced social networking experience, the Iconia Tab A200 includes Acer SocialJogger, which consolidates Facebook, Twitter and more into one spot.

The Iconia Tab A200 improves multitasking with the unique interactive Acer Ring interface, allowing users to customize their tablet experience by putting their most commonly used applications into one easy spot. Users can launch the ring by tapping the double circle located in the system bar, opening a series of key apps, settings, bookmarks or contextual menu options. The tablet also features Screenshot, which quickly captures web images, articles, Google Maps and even smiling faces from video calls. Screenshot can be used in any app for maximum convenience.

Acer clear.fi is installed on the Acer Iconia Tab A200 to connect with any other DLNA-compliant device to quickly and easily share digital medai. Clear.fi automatically connects all Acer devices on a network (smartphones, notebooks, desktops, HD media plays and storage devices) and gathers and organizes media files by type (video, music, photos, pre-recorded TV).