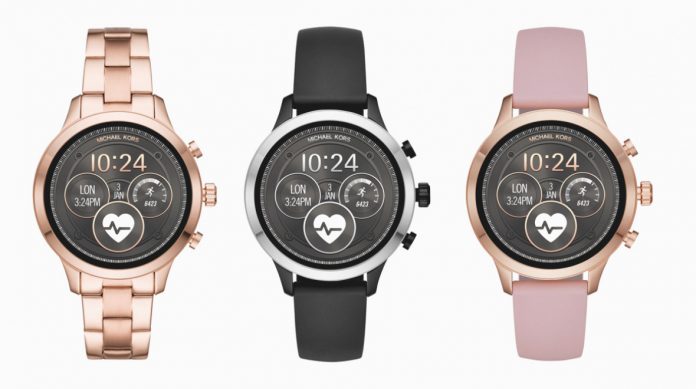 Michael Kors Runway watch comes in one size featuring a 1.2-inch screen with a 390 x 390 pixel display and is powered by the Snapdragon 2100 processor. Releasing a watch with the soon to be outdated Snapdragon 2100 processor is an odd choice. Qualcomm is due to have an event in September launching a new line of smartwatch processors. Which undoubtedly will lead to the release of new faster watches in the near future.

Soon to be outdated but not out of style

Michael Kors isn’t the only one doing this, however. Fossil recently launched their new Q Explorist HR and Venture HR watches using the same Snapdragon 2100 processor. It is important to note that Fossil and Michael Kors are both owned by the same parent company Fossil Group though. More than likely they had been working on these watches already and wanted to get them out before the release of the new processor.

A smartwatch isn’t all about what processor it uses though. The Runway watch includes some fantastic features as well as style. Even without the next greatest processor for Wear OS, you’ll still be able to track your fitness and use Android Pay as well as every other Wear OS feature.

The Michael Kors Runway watch comes in three different colors including silver tone, gold tone, and rose gold tone. It starts at $295 with a silicone band but can run you up to $350 when you choose a metal band. If you’re interested in picking one up, the watches are available now through the Michael Kors website.