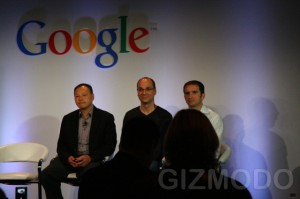 After endless speculation, today’s press event at Google answered the burning questions about the Nexus One. Â The event, though, offered more than just news about the Nexus One. Â It also offered insight about Google’s role in shaping the future of Android. Â With steam from the hype machine finally easing up, let’s review some of the things that are about to happen for Android.

Cooperation with Google, manufacturers, and carriers
Some of the only new information to come from the press event had to do with carriers and handset manufacturers. Â It was no secret that the Nexus One was made by HTC, had T-Mobile 3G built-in, and would have an offer for a T-Mobile subsidized price. Â What was completely missed by virtually everyone (is there a link anywhere to the contrary?) was the plan to bring the Nexus One to Verizon and Vodafone in the spring of this year.

During the Q&A session, Mario Queiroz mentioned that there were ongoing discussions with a number of carriers. Â He even went so far as to suggest that one of the largest obstacles was system integration with those carriers in order to make the purchase and activation process as seamless to the customer as possible.

Google also made a point about manufacturers. Â A number of times we heard about the partnership and strong relationship between Google and handset makers – especially HTC and Motorola. Though this was expected to be a Nexus One event, Motorola CEO Sanjay Jha joined the panel during the Q&A session – seated right beside HTC CEO Peter Chou.

At the risk of hopeful speculation, it seems reasonable that Google is working to expand the device “store” by offering more than a single device on a couple of carriers.

Multitouch and app storage
One of the best questions from the Q&A session received one of the most aggravating answers. Â It seems Google still refuses to address the question of multitouch support for US-based devices. Â When pressed for clarification about why Google applications (Maps, Gallery, Browser) had multitouch capabilities in overseas equivalents to US devices (Hero, Droid / Milestone), Andy Rubin could only dodge the purpose for the question, pushing it off as a software question for device manufacturers or developers. Regardless of the importance of multitouch in the broad scheme, Google needs to move beyond it by openly addressing it. Build it in or don’t and say why you didn’t. Â The coy act is grating and starting to feel a lot like Apple’s take on cut / copy / paste for the iPhone. Â Google: please do not wait so long that the press applauds for multitouch just because you finally came to your senses.

Another question addressed a longtime frustration with Android: why is the application installation space so limited? Â The answer was most encouraging: the issue is one of piracy, but there will soon be an upgrade for installing applications to an SD card. Â Again, no specific information on when or which OS versions would be supported, but this is likely the first time that the issue has been so clearly addressed – especially with such a positive result.

The event as a whole might have felt anticlimactic after weeks of anticipation, fizzling out with details of the “superphone” we already knew about and not really shaking up the mobile ecosystem after all. Â If it were seen as an Android event, however, the news is promising.