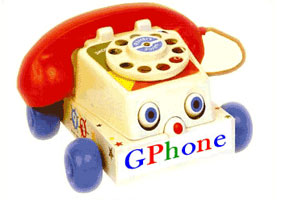 A few years ago before the iPhone became the “iPhone,” I remember hearing about an Apple device that would be a converged device of a phone and an iPod. Â Crazy right? Â Take a look at today’s landscape of the different manufacturers and platforms, almost anything is possible when it comes to mobile devices.

Way back in late 2008, the FCC approved White Space spectrum for frequencies that were being abandoned by analog television signals moving to digital to be used by wireless broadband. Â Here is one of the pieces I remembered reading:Â Wired article on White Spaces. Â What better technology than a signal that is already ubiquitous, can go through walls and into buildings, and is free?

Take a look at thisÂ Google patent filed in March 2007 when you have time, but here are a few salient points from the patent:

These were particularly interesting to me as it can be interpreted that this particular device will access the web and voice traffic through non-traditional carrier traffic. Â This is where open source comes in and not just in the context of software development. Â When open source products and services are introduced they usually make a commodity of the proprietary standard. Â While success is in the eye of the beholder, think of what Firefox has done to the IE browser market share, slivers of Linux PCs that were non-existent just last year, and especially in the enterprise space where price is king.

Now those of us who keep up with Android know what a sore spot the different versions are with carrier phones, specifically the TMO G1, Sprint Hero, and the Motorola Droid ranging from Android 1.5 to 2.0 Â So what would the Google phone be? Â Would it be introduced with 2.0, 2.5, or even 3.0? Â How will the carriers respond to the obvious competition while still supporting their own Android phones? Â It seems that Google could have its cake and eat it too:Â  a broad swath of carrier phones that have Android and communicate with traditional technologies such as CDMA and GSM but also give us, the consumer, the choice for something different. Â And that is certainly what Google does very well… give us choices. Â Whether it be Gmail, Maps, or Voice, it all comes down to choice. Â I don’t have to use their services but I do because they are not just free but usually better than their competition even in perpetual beta status.

The Google phone could excel because it would be carrier independent, ’nuff said. Â Imagine, if you will, a phone that can be bought with or without subsidy (speculation is that it will be subsidized by ads) and will access limitless broadband in North America for data and voice. Â And with the recent announcement of Google’s acquisition of SIP provider Gizmo5 and integration with the Google Voice UI, the possibility of this phone is better than ever.