Whenever you go to the Play Store (or App Store, or Windows Store, or whatever store you use) and search for something, the store goes through multiple algorithms to determine exactly what apps to show you, and it does it so fast, you don’t even know it’s happening. But when you stop to think about it, what exactly are those algorithms searching for when they are looking for your perfect app?

I recently got the chance to talk to Gareth Price of Ready Set Rocket about App Store Optimization (ASO) and why the current system is completely broken. So open your mind tanks because I (with Gareth’s help) am about to drop some high octane knowledge on you! Let’s ride!

If you have not heard of Ready Set Rocket, they are a marketing firm based in New York City that specializes in optimizing marketing across channels. They also utilize apps and services to help reach untapped customers. Basically, they are marketing for the digital age when many customers are not reachable through TV ads, billboards, and magazines.

For those of you who do not know what ASO is, here is a little basic info. App store optimization is used by developers to see how apps are entered into the app store and to make sure that the correct app gets in front of the right customer. This can be done through naming, logos, app descriptions, reviews, and number of downloads. Ready Set Rocket represents premium brands with large audiences, which means that ASO is extremely important for them. They have to make sure that they app they make for a client not only performs well and looks nice, but that it is also discoverable by the right audience. In a world full of fake apps, it is crucial to get the official app noticed and downloaded by customers.

So what’s wrong with it?

Unfortunately, Gareth says that the current set up for ASO is broken. In the early 2000’s, search engine optimization (SEO) suffered from people and companies attempting to game the system to cheating their websites to higher placements in search results. Now, ASO is experiencing the same fate with developers and creators discovering loopholes to bump their apps to the top of search results.

You may have noticed that from time to time, poorly created, low-quality apps appear in the top apps for a certain day or week. You can tell by either downloading them or looking at screenshots that the app is not good, but it still has thousands of downloads and high ratings. Odds are, this app faked its reviews and installs.

Gareth revealed to me that there are many ways to game the system. The simplest way is to pay for a bulk amount of reviews and installs on your app. This action is often referred to as black hat. While this is easy and effortless, it is pretty obvious to tell which apps have cheated this way. Usually, the reviews are all similar in length, wording, and general tone.

There are other ways to game the system. If you have ever played a game that offered you tokens (or gems, coins, etc) for downloading a certain app, odds are you downloaded the app, got your tokens, and uninstalled it. While this is not as inherently bad as purchasing installs, it is still a way to gain dishonest installs for an app.

When you hear about something like paying for fake reviews, you have to wonder about the legality of it. Gareth helped shed some light on this for me. He said that purchasing reviews is not illegal, but it goes against the Terms of Service for app stores. So technically these developers are not committing fraud, but just violating the terms they agreed to. App store owners like Google and Apple can remove apps that engage in this activity, but there is no legal action that can be taken.

There’s gotta be something we can do!

So let’s say you have created an app that is awesome and does everything a person could ask from it, but it is getting lost in search results to apps that have gained fake installs. Is there anything you can do about it? Unfortunately, Gareth says there is currently no way for developers, creators, and users to fight these faked apps.

I would suggest writing real reviews on apps you have installed and suspect might be gaining illegitimate installs to let users know how the app really is. App store providers like Google and Apple are the only ones who can directly act against black hat. They can remove apps and developers who go against the terms of service for their stores which may help better apps rise to the top ranks legitimately.

What needs to change about ASO? 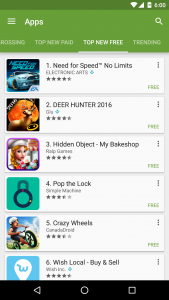 We have heard what is bad about ASO, how people can cheat the system, and what can be done to stop it, but now we need to talk about what needs to change about ASO. Gareth believes that app store providers should tweak their algorithms to be more based on quality than quantity. Perhaps have app stores analyze the semantics of reviews to help spot fakes.

To determine the quality of the app, Gareth feels like there shoulAd be more complex algorithms that go past just installing the app. Take into account how much time the app is used and how long the app is installed before the user removes it should all come into play when determining an app’s placement in the app store. Making these algorithms more transparent also doesn’t help the ASO situation because it allows developers to find ways to game the system. If you kept the algorithms shadowed and complex, developers would spend more time, money, and resources creating a better app than attempting to move up in the rankings.

When will it change?

So are we going to see a change in ASO soon? Unfortunately, probably not. People only have a finite number of app needs, and as app stores reach maturity, those needs are mostly taken care of. The companies that run these app stores (Apple, Google, etc.) are not focused on helping each developer’s app reach it correct position. They are focused on meeting the customers’ needs with the apps they provide. As long as there is a quality app available for users’ needs, these companies are going to be content. As for getting rid of fake reviews and revamping the ranking system, Gareth says we are far away from that.

This whole article might have sounded like one big downer. If you create a quality app, companies who can afford to buy installs and reviews will be rated higher than you even if their app isn’t good. There is not much users can do to stop those who game the system. And app store providers are not too worried about the fake reviews flooding their stores because customer needs are met. If you were a developer reading all of that, you’d probably feel pretty awful.

But Gareth left me with a fantastic piece of advice for developing apps. “Making a high-quality product that people need is the best way to find success.” If that does not lift you up and make you want to try harder, then I do not know what will. Sure, these cheating apps are currently ranked higher than far more quality apps, but that will not last forever. Making a quality app will grow your users organically, and they are way more likely to stay with your app instead of looking for an alternative.

I hope that you have all learned something from this informative and educational. I would like to thank Gareth Price for taking the time to talk with me about app store optimization and to remind everyone that quality always trumps quantity.