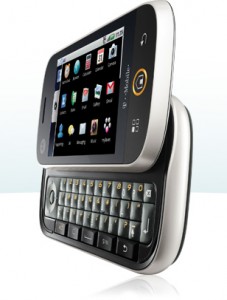 The press ink is not even dry after the Motorola Cliq was announced this past week and there is already talk of the Cliq’s failure.Â  Here are my top three reasons I believe this device will be a hit for T-Mobile and beyond:

1. This phone has instant street cred with the millennial crowd as it has Facebook, Twitter, and MySpace interfaces built in for contact management and messaging. And those are just some of the services available on Android.Â  These are the consumers that want to blend their online lives with a device that will not make them have to choose between a PC or a mobile.Â  In this configuration, messages are messages and from what I saw at the announcement these messages can all be viewed from the same “Happenings” widget.

[quote]With the G1, the keyboard is the killer app for a messaging device and as much as touch screen devices are lauded for their thinness and svelte form factors nothing quite beats a physical keyboard for a serial social-ist.Â  So given T-Mobile’s success with the G1, a less than stellar looking and much less polished phone, the Cliq looks well on its way to being a hit.Â  Even the ill-named myTouch 3G, is oft maligned for its lack of a real keyboard while cheered for its compactness so Cliq could be the perfect convergence of these two devices.

2. Rumored price point is zero dollars on contract. What better price than free for can you ask for the price of Android admission for an under twenty-something or teen?Â  But even if it is $150 or lower it will still be the cheapest Android phone to date.Â  This could be the new non-barrier of entry for mass adoption of Android to take hold.Â  Sort of what T-Mobile had done with the maturation of Sidekicks over the past few years.

Make this a first device that has modest smart-phone abilities then move the consumer upstream to more sophisticated hardware with a sophisticated price.Â  The only drawback here though could be the reluctance to get the data plan, especially not that T-Mobile has decided to change the T’s and C’s for smart phones and require them to have data devices.Â  But what is the point of a socially aware networking phone to only be available over WiFi?Â  Point taken T-Mobile.

3. Take the world wide web (not the WAP version) everywhere you are. For a lot of users this will be a welcomed change to upgrade to the WebKit browser and up from a WAP one that compresses and translates websites into more palatable version for particular phones with small screens.

The MOTOBLUR UI has enhanced Android for social networking use not only with the introduction of new widgets but by combining messaging, contacts, and updates in one API forÂ  disparate applications.Â  Sort of Moto’s answer to Palm’s webOS.Â  And it will give the user instant connectivity to specific online applications that will keep them in touch with others.Â  This is just another real world example of the cloud sync’ing with various client interfaces to give a seamless view of the Web and, oh by the way, will be totally customizable by the user.

This device looks to be a very good first effort from Motorola and I am looking forward not just to the Cliq, but other soon-to-be-announced handsets that will launch on T-Mobile, Verizon, and all the other WSP’s out there.