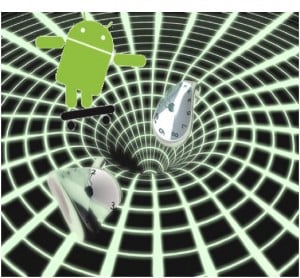 Time travel has fascinated mankind for thousands of years. Worm holes, space craft, and even ridiculously modded DeLoreans have served as fodder for our quest to control our relationship to the relentless plodding of time. Fortunately, for (all of) mankind, a little personal electronics company called Sony introduced what may have been the first legitimate time control consumer device a few decades back. It was known mysteriously as, “BetaMax”.

While Sony’s initial foray into the VCR (that’s video cassette recorder to those new among us) market did not achieve the worldwide domination they surely expected, it did finally allow people to be (virtually) in two places at one time. Fast-forward to a time when enterprise data solutions are smaller than that pioneering BetaMax cassette, and you have the dawn of Android.

Recognizing that other smartphone platforms MAY exist outside of the Androidosphere, what we are talking about today is the potential Android applications have to make our lives better. Let’s start with scholars’ estimates that average Americans (and presumably lots of other world citizens) spend between three and five years of their lives waiting in some sort of line. Taking the more conservative estimate to mean 26,280 hours per person, that is a LOT of time.

So, what might you do with your time if you had a computer, internet connection, and virtually unlimited access to computer applications (i.e. Android handset), while you were standing in line ? Well, I’ve seen writers estimate that the first draft of a novel is achievable within three months. Think how much more quickly you could create the invitation list for a birthday party, or, SuperBowl Bash. Heck, with Android 2.0’s recently announced Microsoft Exchange support, you could probably make a habit of planning your next day’s schedule while waiting in the supermarket checkout line.

And, as fun as that sounds, the real point here is for developers and Androiders alike to harness the tremendous opportunities inherent in such a “time traveling” device. Developers have a responsibility to at least consider how their applications might be used to reclaim the numerous fragments of our lives that were previously considered “wasted.” And, Android owners owe it to themselves to discover how the mundane everyday tasks of life might be squeezed to free up time for more enjoyable pursuits. As a developer, and as an Android user, I’m doing both. What say you ?