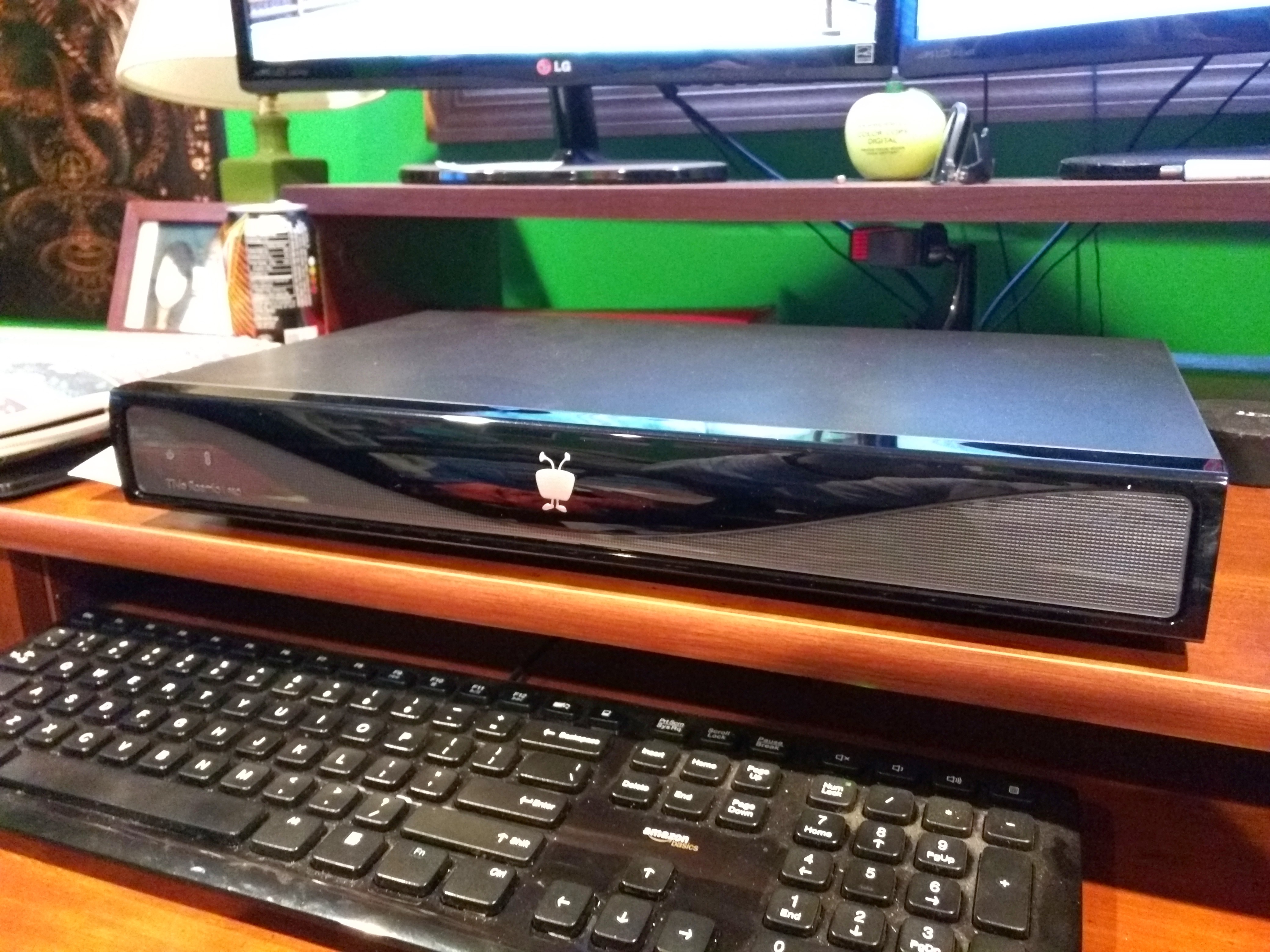 For 2015, TiVo has decided to completely revamp their mobile app on the Google Play Store. Previously, the last time the current app was updated was on October 13, 2014. There has been good reason, because the new app is full of new features and an all-new design. TiVo was nice enough to send us not only the new app, but a Roamio Pro to review as well.

The TiVo app brings an all-new design bringing it up to-date with the latest iteration of Android. Mainly, it features a slide-out drawer which seems to be a mainstay nowadays, a search bar for shows and movies, and also a quick view of shows.

Once past the login screen, the TiVo app brings you to the “What to Watch” screen that features listings of popular TV, sports, movies, my shows, and a kids section. In order to see the other options, you must slide-out the drawer on the left side of the screen which brings more options such as info on your current show, My Shows, OnePlass Manager, To Do List, and a Remote Control.

One of the most convenient features of the TiVo app is the ability to setup your OnePlass Manager on the go. Did you forget to record that new episode of Fast N’ Loud tonight? No problem. On the top of the screen, you can search for any TV show or movie that might appear on cable in the near future. Once you find the show you want to record, press your selection and you are able to “Get show”.

The options for setting up your OnePass include what season to start the recording from, which channel (HD or standard definition), how many episodes to keep, how long to keep recordings, and even what time to start and end the recording.

One thing I would like to see added to the app in the future would be a way to customize the categories on the “What to Watch” section. It would be nice to have the ability narrow down the categories to make them more specific. For example, instead of all sports, narrow it to just hockey.

The remote control I found was very helpful when my remote was nowhere to be found or it was on the other side of the room. It comes with all of the controls as the remote. The phone layout is a little odd because you have to scroll through three screens of controls, where the tablet remote is much more intuitive.

The best way to picture the TiVo app is essentially your TiVo remote with a screen on the go. It is capable of all the same things as your remote, but you are able to stream recorded content to your device. The app is very stable and it has never forced closed on me, which is good for an app that is capable of so much. Another perk is that it is both optimized for phones and tablets. If the buttons were slightly smaller to fit more buttons on the screen, I think that would be for the best.

A few things I would note about the app is you are only able to have a total of 12 devices connected to your single TiVo box, which may be a problem. Make sure you pick your devices sparingly. Another thing that surpised me, but then again not really, was that you cannot stream content to a device that is rooted. There are ways to record your screen on non-rooted devices so what’s the big deal if the device is rooted? That kind of irked me.

I have never owned a DVR previously, so this was an entirely new experience for me. Previously, I had been relying on Comcast for updating their On Demand playlists when I wanted to watch a show I missed. Unfortunately, I would have to wait a few days or even up to a week for them to upload the latest episodes. While it wasn’t the end of the world, it sure was a hassle. That is where the TiVo box comes in.

Setting up the Roamio Pro was quite easy and the hardest time I had with the setup was dealing with Comcast. Once plugged in, the TiVo box fired right up and setup was very basic. Following the on-screen prompts is as easy as it gets and it is very clear.

For getting the cable to work through a TiVo box on Comcast, you need to get a CableCARD (M-Card) to decrypt the encrypted programming. Once I picked an M-Card from my local Xfinity store, I was good to go, just needed to activate it by calling Comcast support.

My advice to you if you are going to pick up a TiVo box, make sure everything is squared away with your cable provider or else you may be without TV for a day or two. Like I said earlier the TiVo box setup was less than 5 minutes, but I spent more time getting a CableCARD and waiting on the phone with Comcast… so be prepared.

TiVo has come a long way since just being a DVR service; they now are a complete in-home entertainment system. The Roamio Pro comes with full internet access, both wired and wireless capabilities. Since the Roamio Pro has internet access, it is able to stream video services such as Netflix, Amazon Instant Video, and Hulu Plus just to name a few. It can also stream web apps such as YouTube, Pandora, Spotify, and MLB.

With my first takes of the device, it is very quick and responsive. Never once has it froze while surfing through content, settings, or setting a recording. Not only is the Roamio Pro great at doing its job by recording your set shows, it also records programming that it thinks you would like. At first, it isn’t very accurate, but that is understandable. The more programming you rate, the more accurate its suggestions will be.

You are also able to search for TV shows and movies throughout all platforms. That means if you search for a TV show, it will not only look for future airings from your cable provider, it will also search through Netflix, Amazon Instant Video, and Hulu Plus. This is the ultimate convenience so you don’t have to search every platform independently. This was definitely one of the most useful features I found on the device.

You might think that having the Roamio Pro record programming you may like will take up too much storage, but it doesn’t. I have about 30-40 shows recorded as of now, both recorded by me and from suggestions, and I am still at 0% of capacity. The Roamio Pro has enough space for around 3,000 hours of standard definition TV. That’s 125 days of streaming content right there. Since HD is quite larger than SD, it can hold up to 450 hours of HD content. That comes out to around 19 days worth of content. Still a good amount.

If you for some reason think that 3,000 hours of TV is not enough content for you, all of the TiVo boxes today come with the ability to expand storage via an external hard drive. As long as the hard drive has an eSATA cable, which nearly all of them do, it’ll be compatible.

The feature that I found myself using the most though, was streaming video services like Netflix and Amazon Instant Video. Usually, I find myself having to turn my Xbox, find my controller, and switch inputs. The fact that my TV and streaming services are all on one device and one input, it makes it so convenient.

Among other things, the Roamio Pro does come with the ability to play some apps and games. They definitely aren’t anything groundbreaking, but the fact that they are included makes me look at the Roamio Pro as a total viewing experience. Not one thing is left out.

One way the TiVo box could get better is if they had the ability to add profiles like Netflix. The problem I have with the current setup is that the opinion shows I like differ from the tastes of those in my house, so it skews my overall “suggestions”. I figure it couldn’t be too much trouble to add the feature, as the Roamio Pro receives updates via the internet.

At the end of the day, if you are looking for a new DVR, be sure to look at TiVo before you purchase one from your cable provider or someone else. I’ve said it multiple times throughout this review, but convenience is the number one thing on the Roamio Pro. TiVo has done a wonderful job piecing together an all-in-one entertainment center and it has not left me disappointed. It is especially helpful if you use multiple streaming services and you want to bring them into one place.

Couple the TiVo Roamio Pro with the all-new TiVo app and you have yourself a winner. TiVo has definitely worked hard on their new app and it pairs excellently with their TiVo boxes. If you think having a TiVo box is convenient, once you have the app to go along with it, it doesn’t get any better. With a few tweaks though, it definitely could get better.

You can find more info on a TiVo box here.