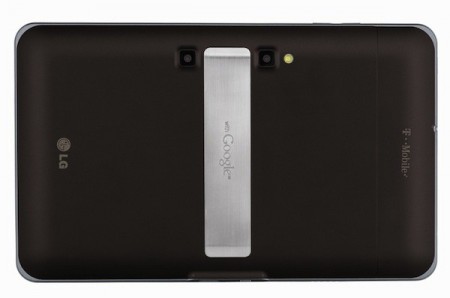 There have been a lot of T-Mo customers who have been eagerly awaiting a pricing announcement for the LG Android powered G-Slate tablet device.  Word finally came down today in the form of a very short press release (available after the break), and the price for the unit is not as good of news as people were hoping.  To get your hands on the 3D capable, Honeycomb powered device, you are going to have to shell out $529.99 with a 2 year commitment, and that is after getting a mail in rebate of $100.  Still, people were lining up to buy the Xoom when it was released at a higher price, what do you think?  Is the $529.99 price point acceptable to you?

T-Mobile G-Slate with Google by LG

Powered by Android 3.0 (Honeycomb), the G-Slate delivers a premium mobile entertainment experience with a brilliant 8.9-inch, 3D-capable, multitouch HD display and the ability to record 3D and full HD video. With the new G-Slate, customers can access their favorite TV shows, magazines, games and more with pre-installed applications such as T-Mobile TV, Need for Speed SHIFT HD and Zinio eReader. The T-Mobile G-Slate will cost $529.99 after $100 mail-in-rebate card with a qualifying mobile broadband plan on two-year agreement, voice line and enrollment in EasyPay.