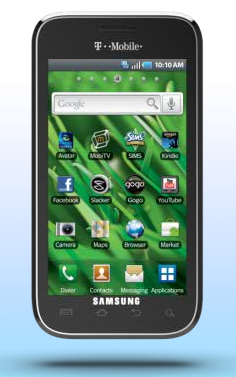 T-Mobile has officially pulled back the curtain on a terribly kept secret as they announce their version of the Samsung Galaxy S.  Called the Samsung Vibrant, it’s loaded with all the great hardware and software you’ve been expecting.

The full list of hardware isn’t given, but we have a strong feeling that it will echo the official Galaxy S specifications pretty much across the board.  Prospective and current T-Mobile customers can look forward to a 1GHz Hummingbird processor, a 4-inch Super AMOLED display, and a 5-megapixel camera with autofocus and HD 720p video recording.   The Vibrant comes with two battery cover options (dark blue , lavender) for added personalization.

Keeping with T-Mobile’s tradition of focusing on “experiences” rather than what’s under the hood, the carrier is offering a robust selection of applications and services.  The phone runs Android 2.1 with TouchWiz 3.0 user interface, features seven panels on the home screen, and supports six languages: English, Spanish, French, Dutch, Italian and Korean.

The Samsung Vibrant will be available for $199.99 starting July 21st from T-Mobile and RadioShack store around the country.  If you are interested in signing up for details and announcements, be sure to check out T-Mobile’s landing page for the Samsung Vibrant. 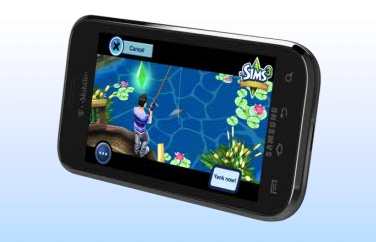