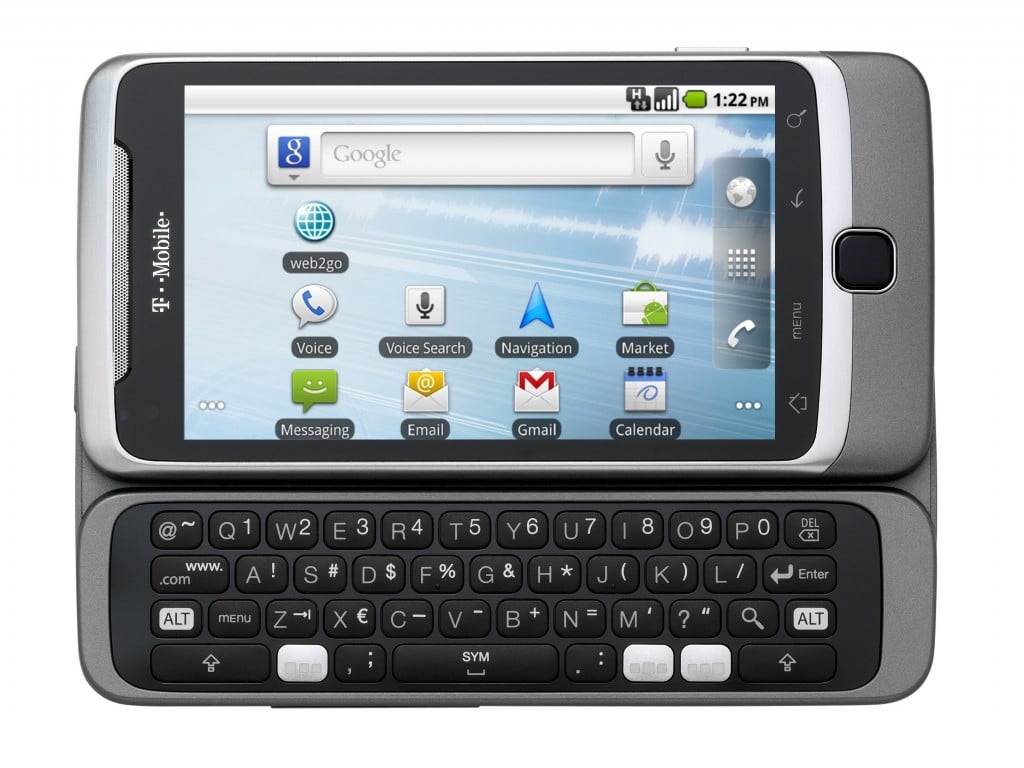 T-Mobile has just pushed out the official press release for the true successor to the groundbreaking G1.  Unfortunately, they didn’t drop any actual release date or pricing on us.  However, they did confirm a handful of rumored details and unveil a couple of new goodies.  Among the new uncovered gems are the 8GB pre-loaded memory card that goes along with the 4GB internal memory as well as the fully integrated Google Voice application.  In a first for all involved, the new Voice app lets customers sign up for an account directly from the handset.

Pretty much everything mentioned was leaked over the last few weeks.  The G2 comes with a 3.7-inch screen, 800MHz Snapdragon MSM7230 processor, and of course, support for the new HSPA+ network rolling out.  Oh yeah, there’s also customizable Quick Keys! According to the press release, the G2 will be available for preorder (in limited quantities) later this month. Look for more details in the next few weeks.  If you haven’t already done so, sign up at http://g2.t-mobile.com for updates.  Look for a $200 price tag whenever T-Mobile gets around to talking costs.

BELLEVUE, Wash. — Sept. 9, 2010 — T-Mobile USA, Inc. today unveiled the T-Mobile® G2™ with Google™, delivering downloads at 4G speeds1, a blazing fast web browsing experience and tight integration with Google services. The G2 breaks new ground as the first smartphone specifically designed for T-Mobile’s new HSPA+ network2, which covers 100 million Americans in more than 55 major metropolitan areas across the country. The G2 is an ultra-powerful smartphone designed by HTC and is the highly anticipated successor to the

“T-Mobile ignited the spark that set the Android world ablaze two years ago with the launch of the world’s first Android-powered mobile phone, the T-Mobile G1, which remains an important milestone for both T-Mobile and the Android operating system,” said Cole Brodman, chief technology and innovation officer, T-Mobile USA. “Now, with the launch of the T-Mobile G2, we are re-teaming with our partners at Google and HTC to provide T-Mobile customers with another first — the first Android smartphone designed to deliver 4G speeds on our new network.”

“One of the advantages of an open platform is the opportunity for developers to create rich mobile experiences and seamlessly get those experiences into the hands of consumers,” said Andy Rubin, vice president, engineering, Google. “From new services, such as Voice Actions, to mobile applications, developer-led Android innovation is flourishing. On Android Market alone, the number of applications available to consumers has grown from just 50 applications two years ago to more than 80,000 applications today.”

“Two years ago, HTC and T-Mobile worked together to deliver the world’s first Android phone, the T-Mobile G1. From that start, Android has grown to be the leading smartphone platform in the U.S., and one of the most popular globally,” said Peter Chou, chief executive officer, HTC Corporation. “With today’s announcement of the G2, HTC and T-Mobile are once again bringing a breakthrough Android product to market.”

The first smartphone specifically designed to deliver 4G speeds on T-Mobile’s new HSPA+ network, the G2 is optimized for performance to provide customers with blazing fast access to a world of information through websites, applications, videos, file downloads and more. Built on Android 2.2, the G2 offers seven customizable home screen panels, including a dedicated panel with one-click access to your favorite Google applications such as Android Market™, which currently offers more than 80,000 applications.

The T-Mobile G2 delivers a powerful mobile data experience that is tightly integrated with Google Voice™, as well as packed with Google applications such as Voice Actions™ from Google, Google Goggles™ and more. It is one of the first smartphones in the industry to offer the new Voice Actions feature of Google Search™, which allows you to control your phone with your voice for calling contacts and businesses, sending messages, browsing the Web, listening to music and completing common tasks. It is also the first smartphone to offer integrated access to Google Voice™, allowing customers to create a new account using their current mobile number right from the home screen. Google Voice then automatically transcribes voicemails to text so customers can read them like an e-mail or text message from their phone or online. Additional pre-loaded Google services include Google Search, Gmail™, Google Maps™ with Places and Navigation, YouTube™, Google Talk™ and Google Earth™, among others.

Adding fuel to the G2’s speed is its Snapdragon™ MSM7230 mobile processor which combines Qualcomm’s new HSPA+ capabilities and second generation applications processor.  The Snapdragon MSM7230 offers an 800 MHz CPU and is optimized to deliver exceptional performance, long battery life and leading edge multimedia and web browsing — with download speeds faster than other solutions currently in the market.

The G2 delivers advanced smartphone features including an HD video camera for recording crystal-clear, high-definition (720p) videos that can be automatically uploaded to your Photobucket account and a 5-megapixel camera with LED flash and autofocus. The G2 also offers smartphone essentials such as easy access to personal and work e-mail, including support for Microsoft® Exchange e-mail, contacts and calendar; social networking; and instant messaging. In addition, the G2 features a pre-installed 8GB microSD memory card with support for up to 32 GB, as well as a music player.

Additional features of the G2 include the following:

The T-Mobile G2 with Google will be available in the U.S. exclusively from T-Mobile, and current T-Mobile customers will have the opportunity to preorder the G2 in limited quantities later this month. Additional availability details will be shared in the coming weeks. Visit http://g2.t-mobile.com to register for updates.