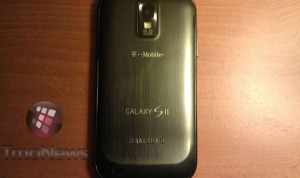 The Samsung Hercules has been identified as a T-Mobile USA variation of the Galaxy S II lineup.  TmoNews obtained some information over the weekend which confirms  some long held suspicions that the Hercules would arrive this summer/fall while other carriers were getting their iterations.

According to sources, this phone will feature a 4.5-inch display and comes preloaded with Netflix, TeleNav, and custom messaging, email and calendar apps. The image of the backside not only confirms the Galaxy S II branding, but also the 8-megapixel camera.

The original Galaxy S II offers users a Super AMOLED Plus display and dual-core 1.2GHz processor so we anticipate at least this much in the Hercules, if not more.  In terms of operating system, we expect to Android 2.3 Gingerbread and the latest TouchWiz UI.  Recent speculation also suggests that the processor speed might get a bump to dual-core 1.4GHz or 1.5GHz chipset.

One rumor that has circled the Samsung Hercules for a while now is that it will be T-Mobile’s first HSPA+ handset, capable of theoretical download speeds of 42Mbps.  Other hardware specifications initially uncovered back in May include 16GB of ROM, 1GB of RAM, and MicroSD card slot.

Should you be looking to replace your existing Android phone with something bigger and better, this will be the one to consider at T-Mobile.  As far as release dates are concerned, all indications are that we might expect this September 26th.