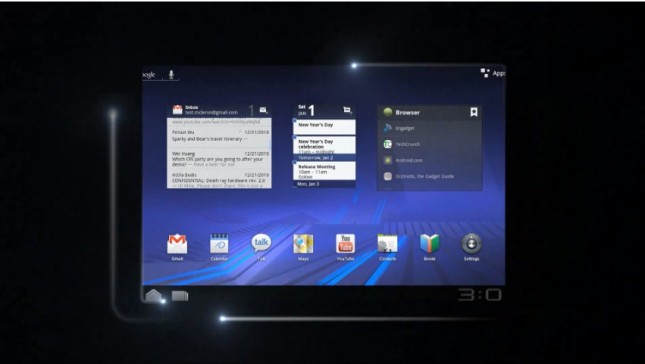 With all the excitement surrounding tablets at CES, it’s no wonder everyone wants in on the action. T-Mobile has just announced via Twitter that it will be bringing the world its first 4G equipped Honeycomb tablet. Dubbed the G-Slate, this LG tablet will run Android 3.0 and be equipped with HSPA+ (4G according to T-Mobile’s standards).

Not much else is known about the tablet. The videos provided by T-Mobile don’t even show off the actual device. However, they are advertising it as being a “with Google” product. Developers will be the first to tell you that that’s a good thing. Below are a bunch of videos showing off the G-Slate and it’s capabilities. More can be found at T-Mobile’s YouTube Channel.

2011 International CES
LAS VEGAS–(BUSINESS WIRE)–Today at 2011 International CES, T-Mobile USA, Inc. and LG Mobile Phones announced the upcoming Android™ Honeycomb-powered T-Mobile® G-Slate™ with Google™, by LG. Expected to be available in coming months, the G-Slate will be the first 4G tablet from the two companies powered by Android 3.0 (Honeycomb), the upcoming version of Google’s Android platform optimized for tablets.

“T-Mobile is proud to add a new milestone in the evolution of the Android platform with our first 4G tablet powered by Android 3.0,” said Cole Brodman, chief marketing officer, T-Mobile USA. “The T-Mobile G-Slate with Google will build on our rich history of Android innovation and leadership and deliver deep integration with Google services.”

“LG is dedicated to continuing its role as an innovation leader and is thrilled to announce its entry into the tablet marketplace with the G-Slate,” said Jeff Hwang, president of LG Mobile Phones. “Streamlining everyday tasks and enhancing entertainment with blazing fast 4G speed, the T-Mobile G-Slate by LG will deliver the latest in Android technology and provide users with an advanced tablet experience.”

The T-Mobile G-Slate will be among the first 4G tablets to fully benefit from the tablet-optimized Android 3.0 platform, which was designed from the ground up for devices with larger screen sizes and addresses the unique aspects of tablet use cases and form factors. The Honeycomb user experience improves on Android favorites such as widgets, multi-tasking, browsing, notifications and customization. It will also feature the latest Google Mobile innovations including Google Maps™ 5.0 with 3D interaction, collection of more than 3 million eBooks and Google Talk™ with video and voice chat.

Additional product details will be disclosed at a later date.