Expected over the next few weeks, the arrival of the myTouch HD is fast approaching.  That means we’re in that interesting runup period where handsets tend to trickle into the wild and get pictured and benchmarked.  Such is the case with one of AndroidSPIN’s sources who had the lucky privilege to test the phone and record some scores.  You can see from the pictures below that the myTouch HD did very well in the Linpack and Quadrant scores.

Initial speculation had pegged the phone with a 1GHz Qualcomm MSM8255 processor, but one of our tipsters tells us that he found it to be different.  After digging through the leaked ROM from last week, he found the device to have an MSM7x30 CPU, and thus, it does not appear to be dual-core.  Other hardware looks to be solid with a 3.8″ WVGA display, 5-megapixel camera, front-facing camera, and support for WiFi, Bluetooth, GPS, and more. 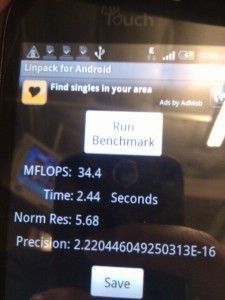 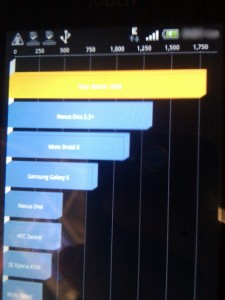 POLL: Which Android series is the best?