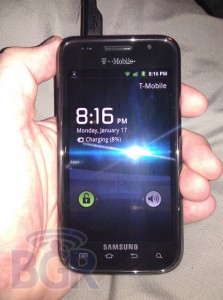 Following directly on the heels of today’s acknowledgment, T-Mobile and Samsung have issued a press release to announce the Galaxy S 4G.  And really, that’s about all they did.  The press release (after the jump) only tells us that it’s set to arrive in the coming weeks and that more details are forthcoming.  The Galaxy S 4G is said to be the first device from T-Mobile able to achieve the theoretical speeds of 21Mbps on the carrier’s network.  Here’s today’s “press release”.

According to T-Mobile, the Galaxy S 4G will be the fastest smartphone running on America’s Largest 4G Network™. Powered by Android™ 2.2 (Froyo), the Galaxy S 4G is  T-Mobile’s first smartphone capable of delivering theoretical peak download speeds of up to 21 Mbps, delivering rich entertainment experiences at even faster speeds through its brilliant Super AMOLED touch screen display.

More information on the Galaxy S 4G from T-Mobile will be available in the coming weeks.