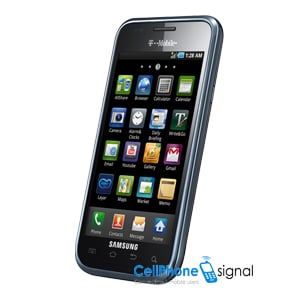 T-Mobile’s version of the Samsung Galaxy S looks as if it will be called the Vibrant when it arrives July 21st.  Cell Phone Signal has been sent some official looking pictures of the device along with details of pre-loaded applications and services.  According to their sources, the T959 Vibrant will ship with “The Sims 3, Avatar, Amazon Kindle, and GoGo in-flight Internet support” among others.  This matches up exactly with what TmoNews was reporting yesterday as well.

Hardware for the Vibrant echoes many of the Galaxy S specs we’ve seen so far including a 4-inch Super AMOLED touch display, 1GHz processor , 5-megapixel camera with HD video capture,and 16GB of memory.  There’s also support, of course, for FM radio, Bluetooth 3.0 digital compass, WiFi b/n, and GPS.  The Vibrant will be powered by Android 2.1 with Samsung’s TouchWiz 3.0 user interface.

So now we’ve got three out of four.  When will we see Verizon’s Galaxy S show up?