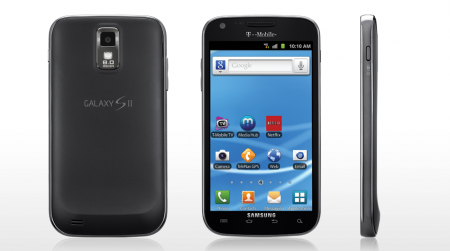 T-Mobile announced a pair of handsets today capable of supporting their growing HSPA+ 42Mbps network, tapping them both with an October 12th arrival. One you already know about – the HTC Amaze 4G.  The other?  Well you already knew about it as well.  After moths of anticipation, the Samsung Galaxy S II hits T-Mobile in but a few short weeks.

We’re really digging the final specifications for T-Mobile’s version which include a dual-core 1.5GHz Qualcomm Snapdragon S3 Processor, Android 2.3.5 Gingerbread and NFC support.  Mix in Samsung’s Media Hub, YouTube, and T-Mobile TV as well as DLNA compatibility and HDMI output and you can see why movie and television fans would be all over this.

The Samsung Galaxy S II arrives in T-Mobile stores on October 12th with a $229.99 price tag, after a $50 mail-in-rebate card with a two-year service agreement.  Like they did with the Amaze 4G, T-Mobile says you gotta pay for them Mbp’s.