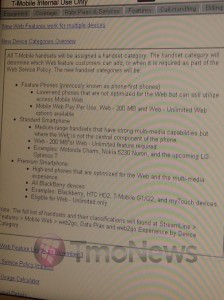 T-Mobile is joining the growing list of carriers offering tiered data plans.  They nation’s fourth largest wireless provider looks to be breaking their lineup of handsets down into three buckets and assigning available data rates.  There will no longer be a one size fits all plan for T-Mobile now that there are classes of phone: Feature phones, Standard Smart Phones, and Premium Smart Phones. Users will have specific options based on the device(s) purchased.  According to documents obtained by TmoNews, these will go into effect on November 3rd, which happens to be the same day the Defy comes out.

Anyone got a gripe with these rate plans?  If anything, we like the idea that not all smart phones are considered equal.  It will be interesting to see how T-Mobile classifies their Android phones going forward.  We can already see that the upcoming LG Optimus T is considered a standard smart phone whereas the G2 and new myTouch are touted as premium.