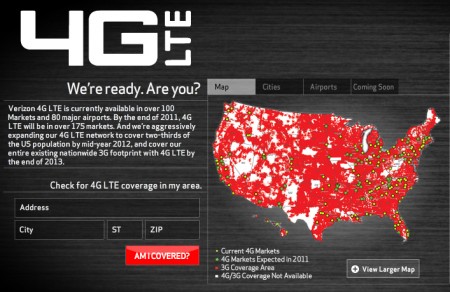 Verizon announced it will be flipping the 4G LTE switch on for another 15 cities come this Thursday, an announcement that will bring Verizon’s 4G LTE network to more than half of the U.S. population. This is quite an amazing feat considering they’ve accomplished this roll out in just under 8 months time. Verizon seems hellbent on bringing the fastest 4G service to U.S. consumers and frankly we aren’t complaining. If you’ve been waiting for Verizon‘s 4G LTE service to hit your area before purchasing or upgrading to an LTE device give this list a glance and see if you’re good to go:

Along with the 15 new markets set to receive the blazing fast speeds of LTE, 10 additional U.S. cities are going to have their network expanded for better coverage. So if you live in one of the following cities below and have been getting spotty coverage, check again tomorrow to see if Verizon has put a little spring in your devices step.

Just think, by this time tomorrow, Big Red’s tiered data monster will be drooling over the 160+ million Americans consuming data at record speeds. Talk about a win-win situation. If you aren’t grandfathered into an unlimited plan be sure to keep an eye on your data plan before you end up emptying your wallet at blazing fast speeds. Enjoy!