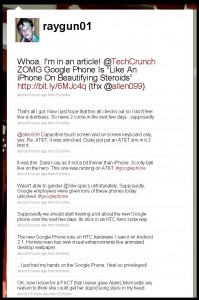 This is the kind of news that will not wait for Monday.Â  According to multiple sources, Google started passing out handsets to employees yesterday.Â  And they sound AWESOME.Â Â  After plenty of rumors and rumblings, this may be the weekend that the Google Phone specs, pictures, and other goodies finally break.Â  Check out a couple of tweets that corroborate each other.

Stuck in mass of traffic leaving work post last all hands of 2009. ZOMG we had fireworks and we all got the new Google phone. It’s beautiful – twitter Great White Snark

A friend from Google showed me the new Android 2.1 phone from HTC coming out in Jan. A sexy beast. Like an iPhone on beautifying steroids. – twitter lhawthorn

So what does this phone look like?Â  Who makes it?Â  What are the specs? Â  CNET’s Jason Howell offers the most information up by way of a comment left on TechCrunch about 3:00AM EST this morning.

I was given the phone for a very limited time from a Google employee. It resembled an HTC Hero to my eyes, though a tiny bit smaller and DEFINITELY thinner. I kept looking over at the guy using it, thinking to myself that it WAS a Hero, but when I asked, he spilled the beans. Google employees were handed the phones today. He reiterated that there would probably be a decent amount of information hitting the tubes this weekend. With my limited time with the device, I saw it running Android 2.1. The home screen had this animated background image that looked nifty with red and blue lasers shooting across it. The gray bar at the bottom of the home screen was replaced with the â€œhouseâ€ line art used on the face of most Android phones that takes you to the home screen. Looked sleeker. Super light phone too.

This phone was unlocked, though the guy had thrown an AT&T sim card into it.

Thatâ€™s about all I was able to glean in my minuteâ€™s worth of dabbling. It was sleek and nice looking, but I am scratching my head trying to figure out what the real difference is between this and any of the newer HTC Android phones. Scanning the apps, I didnâ€™t see anything that really stood out as different from what I have on my Droid. And being that it was Android 2.1, the only really differences I saw were a few visual ones. So it doesnâ€™t appear (in its current state) to really be offering â€œthe *real* Androidâ€ experience thatâ€™s mind blowingly different from whatâ€™s out there so far. Maybe I just didnâ€™t dig deep enough to find it though.

Sorry I couldnâ€™t snap a photo

We do have to play Debbie Downer for a second; One possibility is that these are just gifts from Google, similar to what happened last year.Â  If you don’t recall, Google gave out unlocked phones instead of year-end bonuses.Â  On the other hand, this does kinda make sense with other things we’ve heard. Why else would Jason’s friend even mention that details would hit the internet over the weekend?Â  What ‘details’ are there if these are simply a gift?

So could the internet blow wide open this weekend with Google Phone news?Â  We certainly hope so!Â  What are your thoughts?