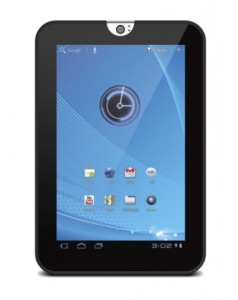 Toshiba has announced today that a new 7-inch variant of their Thrive tablet will be arriving in December, bringing a new level of portability to their growing Android lineup.  Available in two versions (16GB or 32GB) the tablets will run Android 3.2 Honeycomb and feature a 1280×800 HD display, a dual-core Tegra 2 chipset, and two cameras (5-megapixel rear, 2-megapixel front).

The 7-inch Thrive looks to copy its predecessor in nearly every facet, including the Micro USB, Micro HDMI and a Micro SD card slots.  Additionally, the tablet also features the same,  Easy Grip finish and relatively thicker appearance.  Even though this doesn’t have quite the same sex appeal as the AT200 Excite, we’re happy to see another hardware player expanding  their Android offerings.

Look for pricing to arrive in the coming weeks as the 4th quarter gets underway!  How much would you be willing to pay for a Toshiba Thrive 7-inch?  We’re hearing under $400 but that’s only logical if you ask us.