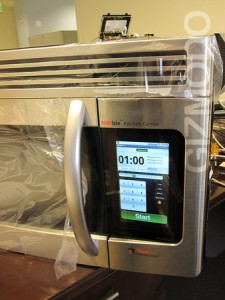 When it comes to Android-based “appliances”Â  there are basically two routes a company can take.Â  First, there are standalone devices like Touch Revolution’s NIMble (Natural Interface Module), which was shown off at last year’s CES.Â  Designed as a unit that can work in any room, NIMble would bring emails, news, weather and more to your coffee tables and night stands.Â  The other Android-based “appliance” would be take existing devices like microwaves and washing machines and load Android onto it.Â  That’s exactly what Touch Revolution is doing this year.

Check out the NIM1000 being demonstrated at CES 2010 later this week. It’s a capacitive touch-sensitive Android module that can be integrated into washer/dryers, microwaves, and, presumably, refrigerators and more. Similar to what the ZII Labs has done with their EGG and TRINITY, the NIM1000 is only designed for other manufacturers like GE and Whirlpool to use. You can see below how Touch Revolution‘s module would work. The washer/dryer features slide controls, stain guides, and more while the microwave can pull double duty as a “kitchen control center”.

Unfortunately, we have yet to see the NIMble from last year so who knows if/when we’ll have washing machines with NIM1000’s installed.

HTC and Under Armor announce partnership

Samsung Unveils WiFi Only Galaxy Tab, Due in Q1