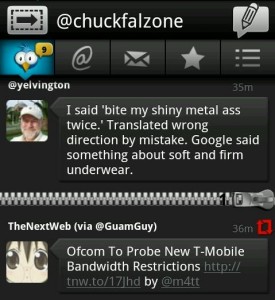 With Tivo, I almost never watch live TV, delaying even big games and season finales so that I can skip the ads. But since I always have one eye on Twitter, occasionally a surprise is spoiled when I see someone tweet who’s watching in real time. Handmark’s Twitter client Tweetcaster has added a feature that will help solve that problem.

Tap on a tweet in the new version of Tweetcaster and one of your options is “Zip It.” That option lets you choose to zip the person who tweeted, anyone else mentioned in the tweet, any hashtags mentioned in the tweet, and/or any key word or phrase. Once zipped, any tweets that match won’t show up in your tweet stream. Instead, you’ll just see a zipper in their place. If you change your mind, just slide open the zipper and you can take a look and/or turn off the filter.

It’s a handy addition to an already polished Twitter app, and I haven’t seen quite the same feature in other Twitter apps.  (Though if you know of another Twitter app with similar filtering functionality, let us know in the comments.)

Ad-supported and paid ($3.99) versions of Tweetcaster are available in the Android Market.