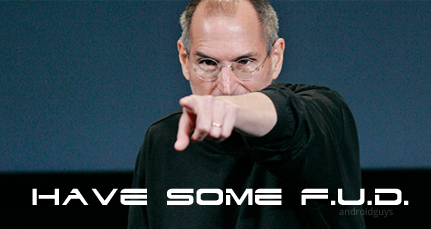 In the off chance you didn’t hear about it yet, Steve Jobs fired off a few terse words (F.U.D.) yesterday on Apple’s earnings call for the third quarter.  Taking aim at RIM, iPad rivals, Android, open source, and pretty much anything else in his space, Jobs tried to bolster the Apple arguments with ‘facts’ and lessons.  We didn’t know it until yesterday, but apparently fragmentation was such a problem for TweetDeck that the company called Android development a “nightmare”.  Or did they?

TweetDeck’s founder and CEO took to twitter (naturally) to let his followers know that Android development was no an involved project.  In fact, they only have two guys working on the Android app and.  Just last week TweetDeck pointed out how “cool” they thought it was that their app worked on so many flavors of Android.

Did we at any point say it was a nightmare developing on Android? Errr nope, no we didn’t. It wasn’t. – @iaindodsworth

@dannysullivan yes exactly! We only have 2 guys developing on Android TweetDeck so that shows how small an issue fragmentation is – @iaindodsworth

In all fairness, we cannot imagine Steve Jobs has finger on everything that goes on outside of Cupertino.  He is in the business of marketing Apple and propping them up.  Nobody in the industry does it better, but when you start dragging others into your evangelism, you need to get things 100 percent accurate.  Blogs and fanboys will be there to dissect your every word, so make sure you don’t confuse things like TweetDeck and TwitterDeck.