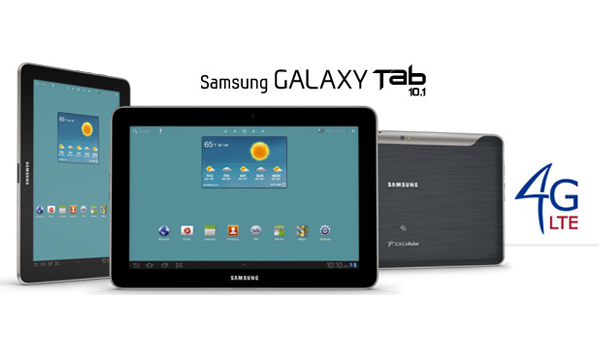 U.S. Cellular has officially kicked off their new 4G LTE lineup with today’s release of the Samsung Galaxy Tab 10.1. Available for $399.99 (after $100 mail-in rebate), the Android-based tablet can be found in select markets. Specifications are identical to those found in other versions of the Tab 10.1 save for the 4G LTE connectivity through U.S. Cellular’s new network.

Highlighted features of the Galaxy Tab 10.1 include:

CHICAGO (March 22, 2012) – U.S. Cellular (NYSE: USM) and Samsung Telecommunications America (Samsung Mobile) have announced that the Samsung Galaxy Tab 10.1™ is available today, both in stores and online at uscellular.com. The Android™-powered tablet runs on the 4G LTE network, with speeds up to 10 times faster than 3G, and is the first device introduced in U.S. Cellular’s 4G LTE device line-up. The Galaxy Tab 10.1 will be available for $499.99 after a $100 mail-in rebate. For a limited time, the tablet will be available for $399.99 after a $100 mail-in rebate in markets currently covered by the 4G LTE network and in those scheduled to be covered by the end of 2012. Visit uscellular.com for detailed pricing.

“The Galaxy Tab 10.1 is the first of many cutting-edge devices slated for use on the 4G LTE network,” said Edward Perez, vice president of sales and marketing operations for U.S. Cellular. “This sleek and functional tablet makes it easier than ever for busy customers to simplify and organize their lives.”

U.S. Cellular customers enjoy the only 4G LTE network with unique benefits, such as new devices faster without continuously signing contracts, free Overage Protection and free Battery Swap. U.S. Cellular also offers customers the only points-based rewards program in the industry, which rewards customers for simple things, such as paying bills on-time, adding a line or referring friends and family. Points may be used for faster phone upgrades, additional lines, devices, accessories and ringtones. It’s one of the reasons U.S. Cellular has the happiest customers in wireless.

About U.S. Cellular
U.S. Cellular rewards its customers with unmatched benefits and industry-leading innovations designed to elevate the customer experience. The Chicago-based carrier has a strong line-up of cutting-edge devices that are all backed by its high-speed nationwide network that has the highest call quality of any national carrier. U.S. Cellular was named a J.D. Power and Associates Customer Service Champion in 2012 for the second year in a row and received PC Magazine’s 2011 Readers’ Choice Award. To learn more about U.S. Cellular, visit one of its retail stores oruscellular.com. To get the latest news, promos and videos, connect with U.S. Cellular on Facebook.com/uscellular, Twitter.com/uscellular and YouTube.com/uscellularcorp.

U.S. Cellular offers 50 percent off phones for all