U.S. Cellular has made two new announcements: a new Android phone, dubbed the Samsung Repp, and a new phone trade-in program. The Samsung Repp is a low- to mid-range phone, with specs that include: 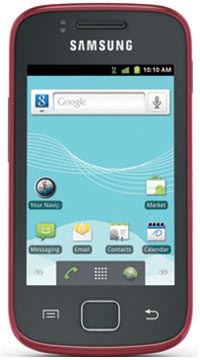 To go along with their new device, U.S. Cellular has also announced their new phone trade-in program, which gives customers special benefits such as a battery swap program, as well as getting up to $150 from U.S. Cellular for their old phone. Customers who want to check out how much they can get for their current device or simply want more information can hit up uscellular.com/trade-in. Be sure to slide down below for the full press release.

[spoiler show=”Press Release” hide=”Press Release”]The Samsung Repp comes with Android 2.3 (Gingerbread), a 3.2-inch HVGA LCD touchcreen, 3 megapixel camera, an 800 MHz processor and a 2GB microSD card that can be expanded to 32 GB. It’s lightweight, easy to use and a good choice for customers looking for their first Android-powered device, but also powerful enough for seasoned Android users.

All of U.S. Cellular’s devices are backed by its high-speed nationwide network, which has the highest call quality and network satisfaction of any national carrier. Customers get unique benefits like free Battery Swap and a rewards program where they get points for paying monthly wireless bills on time, adding a line or referring new customers.

Customers who want to upgrade to the Samsung Repp can take advantage of U.S. Cellular’s new Trade-In Program for used phones and tablets. Customers can visit their local store or uscellular.com/trade-in to find out how much their old device is worth. U.S. Cellular also accepts devices from other carriers and will pay customers up to $150 for a device, which comes as a check.

The Trade-In Program is another way that U.S. Cellular is taking the cost out of switching wireless providers. Now through Nov. 20, select phones in the carrier’s cutting-edge device portfolio are free with no activation fee. Current customers who are adding a new line can also select one of the free phones with waived activation fee.[/spoiler]