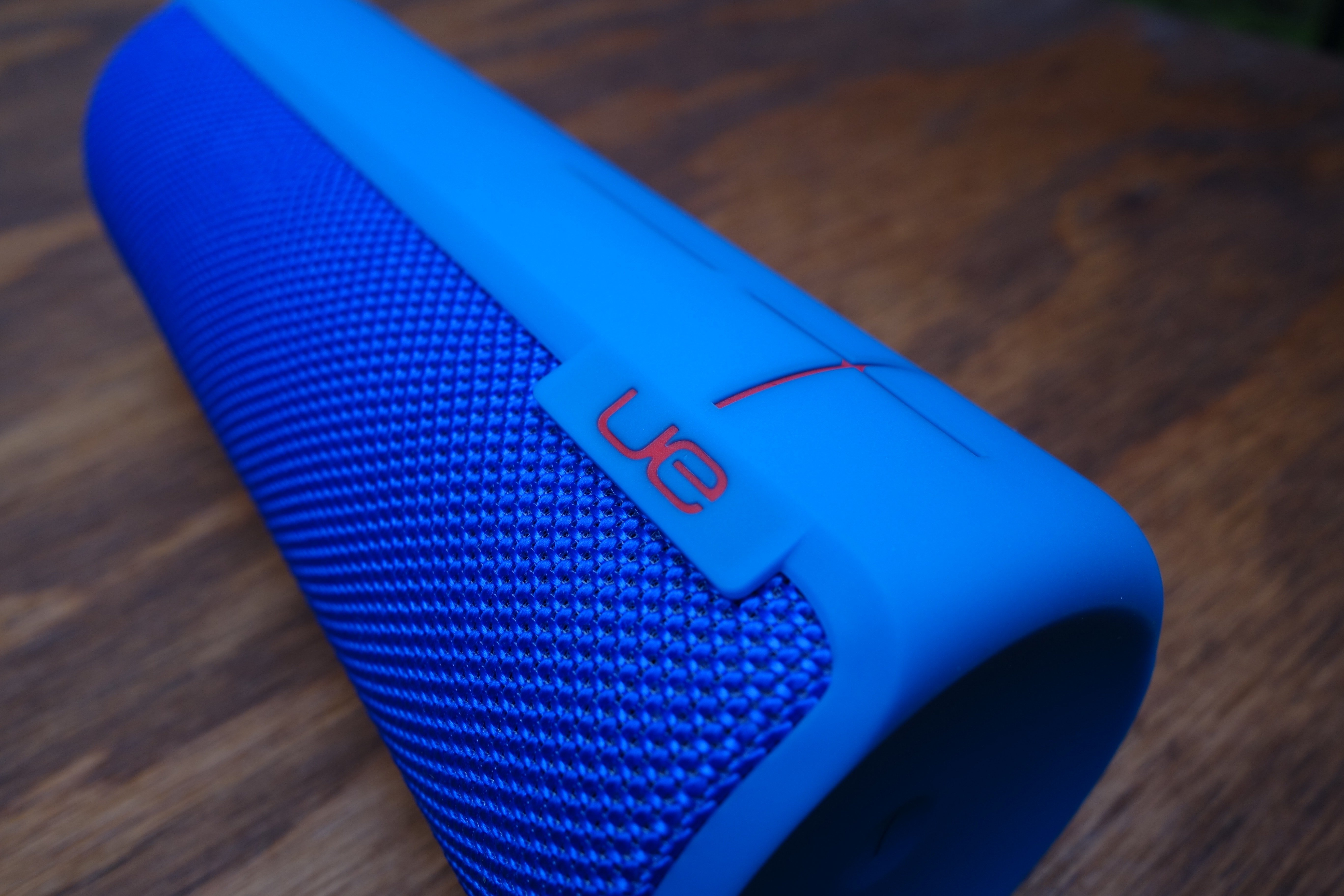 Ultimate Ears (UE) has proficiently managed to position itself along side popular names in audio (Bose, JBL, Beats), and for good reason. Backed by Logitech, the brand has been able to keep up its excellent sounding momentum. A couple years ago, UE expanded into the portable wireless speaker market, with the Boom. Today, we have its sequel to review for you guys – the Boom 2. 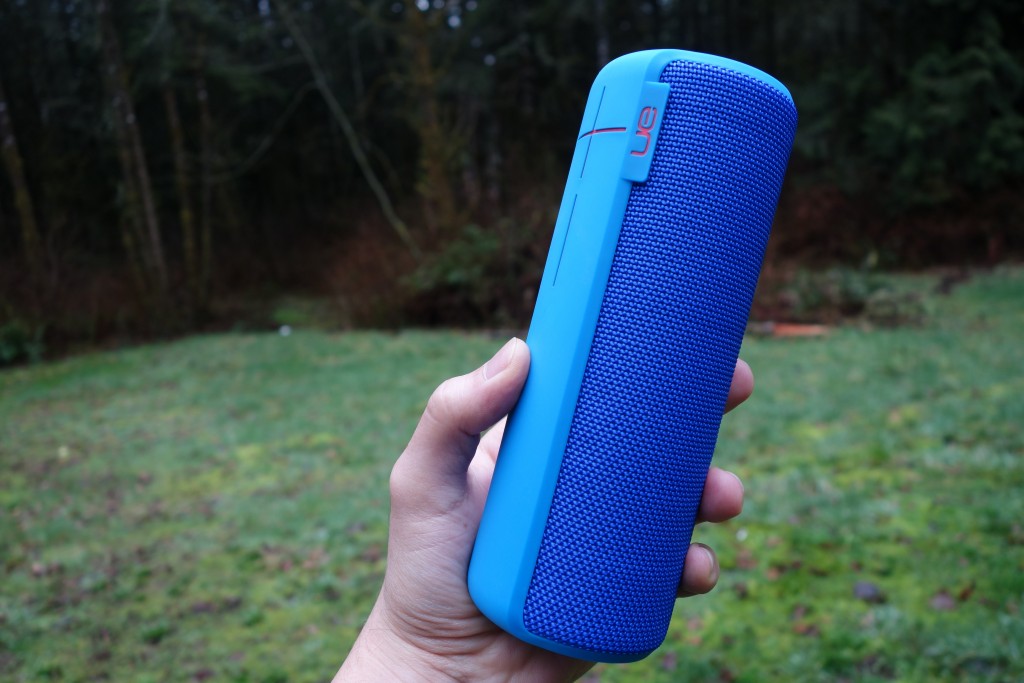 UE promises big, impactful, and engaging sound. Bluetooth speakers often compromise audio quality for their portable aspects. Let’s find out if UE manages to strike a balance and bring the boom, as its name implies.

UE built the Boom with a cylindrical design, and I kind of dig it. It’s a simple and concise package; all that a portable speaker should be.

And the design’s strategy makes sense. It doesn’t shoot audio in one direction like a typical speaker. The cylindrical shape (paired with dual audio drivers) allows the sound to encompass. It’s especially effective indoors, where sound can go in all directions and bounce off the walls. We’ll get to the sound quality later in the review.

UE also did a great job with the size of the unit. It’s not too big or too small. The official dimensions are: 2.75″ diameter and 7.1″ height. It’s not the lightest speaker out there at 1.2 lbs, but I’ll take a little extra heft for a robust build and large battery. 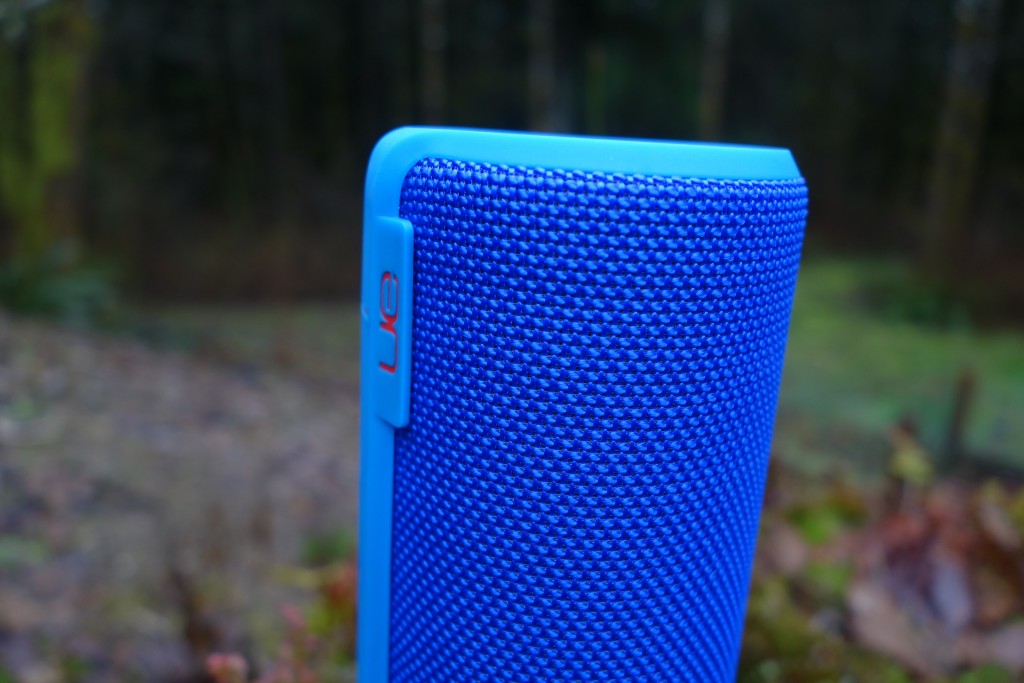 There is honestly not much to say on the Boom 2’s appearance, and that’s okay. There’s an appeal to the simplicity. Most of what you’ll see is a fabric weave around the device.

The two-tone blue color that I was given is called BrainFreeze. UE has a bunch of different color schemes to tickle your fancy.

A vertical, rubbery strip connects the top and bottom caps. The material’s considerable thickness conveys the sturdiness of the build. The Boom 2 is made rugged and definitely feels like it can take some hits. UE says that it is also IPX7 certified (can be immersed in 1 meter of water for up to 30 minutes).

You won’t miss those huge +/- volume buttons on the body. The shapes are slits that expose a different color (orange on my unit). 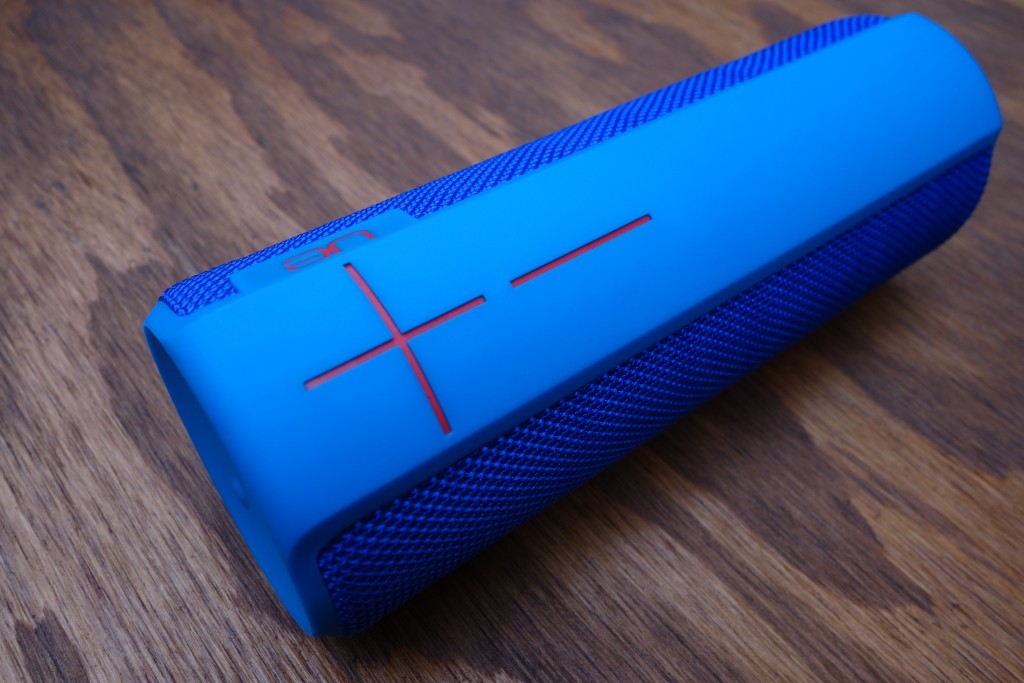 Moving to the top, you’ll find a covertly placed power button dead center. The extra button adjacent to it puts the Boom 2 back in discoverable mode, to pair more devices to it. 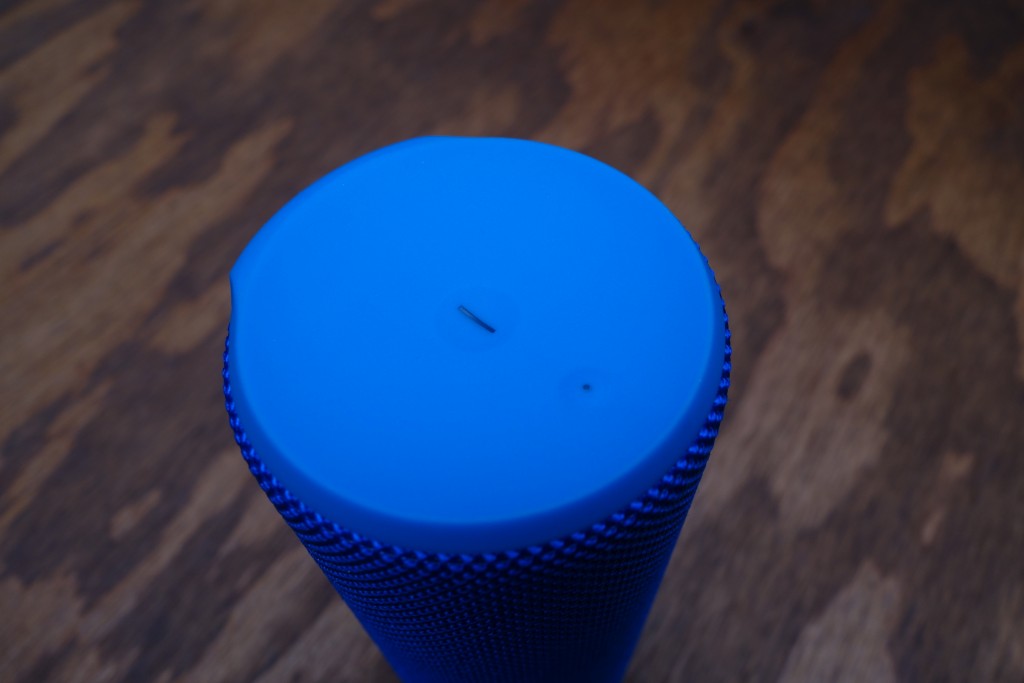 On the bottom, you’ll find an attachment ring for clipping the speaker onto a travel bag. Two flaps flank it, which seal the micro-USB charging port and an aux port (for wired audio input). 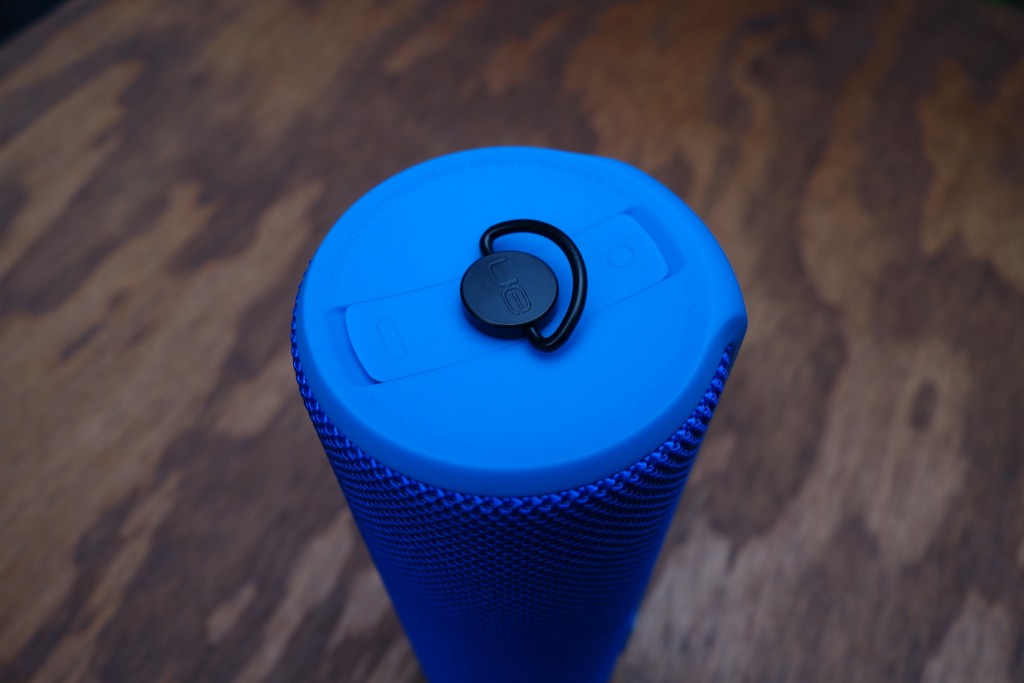 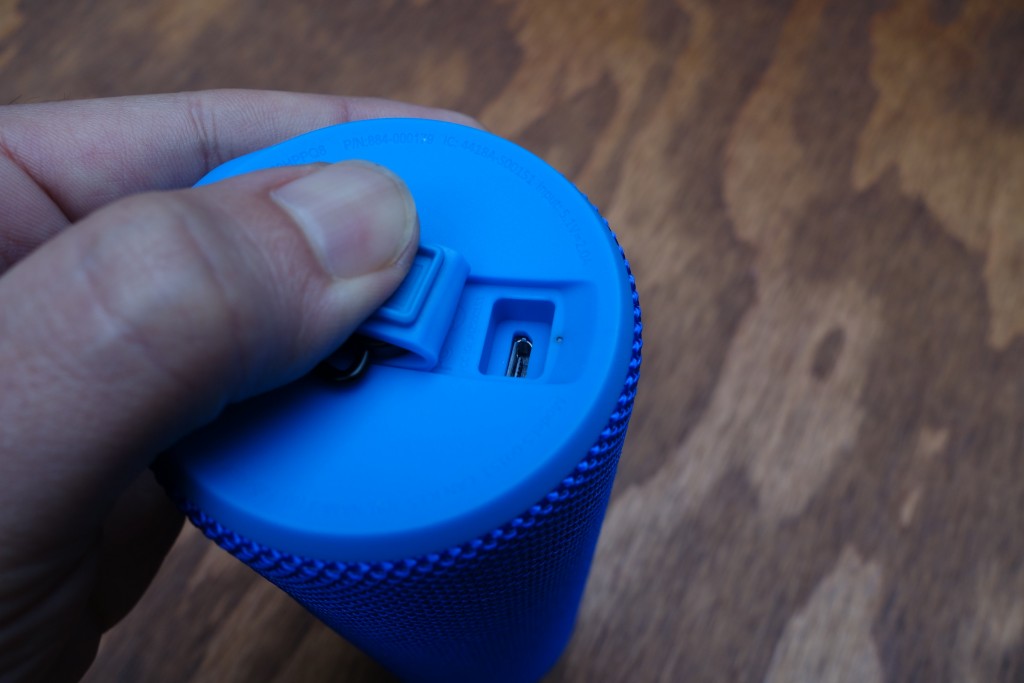 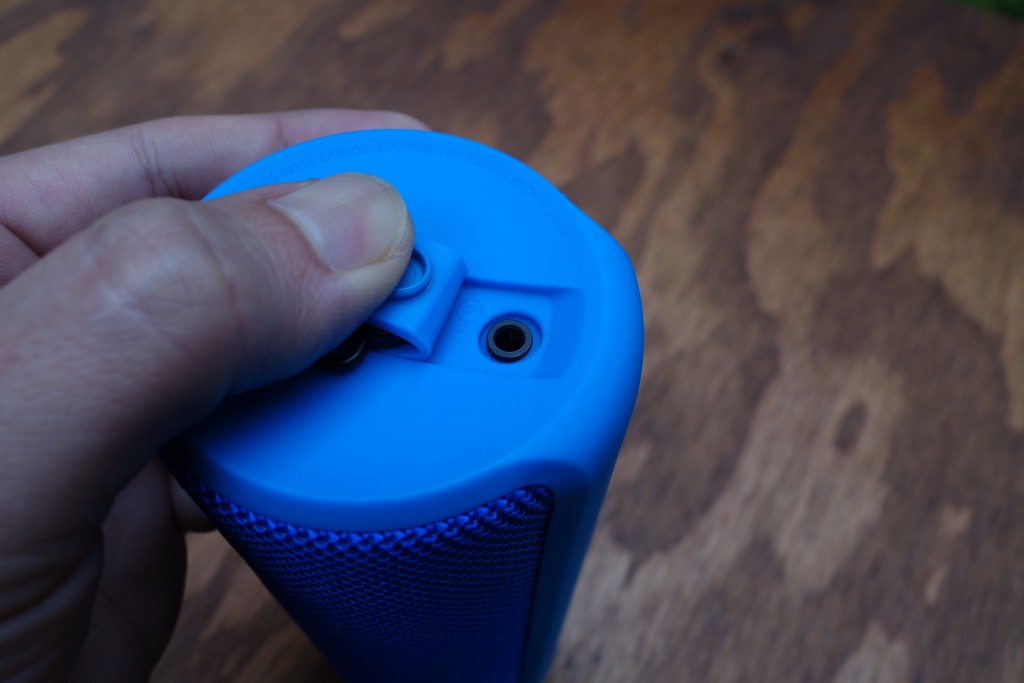 As implied in the previous section, the Boom 2 is extremely user friendly. The buttons/ports are all placed neatly and concisely. And pairing your source is fortunately easy as well.

On the initial power up, the speaker will be in discovery mode and await your source’s connection. It will stick to that source henceforth. UE allows you to pair a whopping eight devices to the Boom 2. Simply hold down the secondary button (that is next to the power button) for 3 seconds and it will look for more devices. If you prefer to pair via NFC, that capability is built-in too.

The packaging includes a flat charging cable and AC adapter. When you plug in the micro-USB connection for charging, you’ll see an LED light indication to let you know the status. 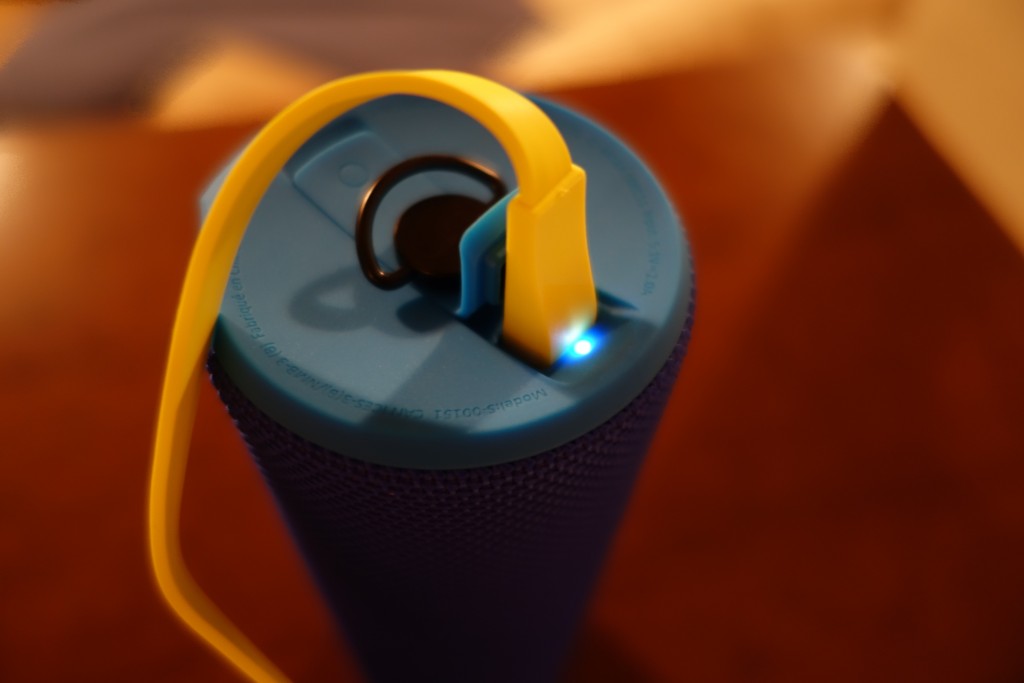 UE rates the battery at providing up to 15 hours of playback, which is great. Bear in mind that different volume levels affect how much battery is used. The charging time from an empty to full battery is 2.5 hours.

In my experience, the strength of the Bluetooth signal was fantastic. My previous Bluetooth speaker would flip out if I put my phone in my pocket. Not so with the Boom 2. It maintains the signal like a champ. UE rates the mobile range as 100 ft (assumingly with nothing in the way). And for those keeping tabs, Boom 2 uses the A2DP Bluetooth standard.

A couple notable tricks are: 1) If the speaker is idle for 15 minutes, it’ll automatically shut off to not waste battery and 2) If you press both volume buttons simultaneously, a voice will tell you the battery level.

So does the Boom 2 bring the boom? In short, very much so. But first, let’s briefly go over the internals. UE says that there are two 45mm active drivers. They output in opposite directions, which gives the encompassing, 360-degree sound.

A frequency range of 90Hz – 20kHz on the Boom 2’s spec sheet puts up a red flag, because it doesn’t include sub-bass frequencies. However, UE sidesteps this concern via what it calls passive radiators. There are two of those as well and they simulate the deep bass response.

So yes, there’s a pleasant emphasis on the bass, but it’s not done irresponsibly. It doesn’t overshadow the other frequencies. With a name like Boom, I expected a boomy bass. But it’s actually tight and punchy.

With that said, don’t worry if you’re a basshead. There’s plenty of satisfaction there. The bass is the star of the show. But the control pleasantly allows the other frequencies to join the fun.

I was surprised how nice the treble range is done. It’s clear and detailed. I also appreciated how the mid-range isn’t pushed back. Vocals actually come through naturally and in your face (in a good way).

It’s not perfect, though. The overall sound could be fuller. Not saying that it’s thin, but I see room for improvement. And to my ears, the bass isn’t always spot-on. Some songs make it lean on boomy, while others had me question its accuracy. However, that’s me nitpicking. I think that UE did a great job with the sound quality overall. 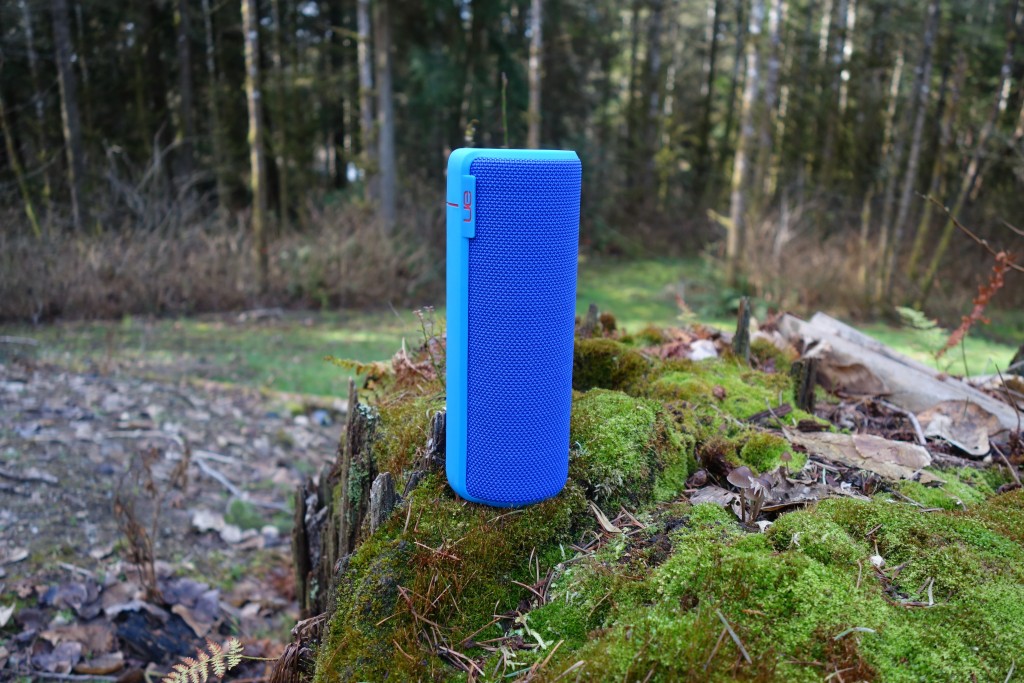 UE has a fabulous Bluetooth speaker here. In my opinion, this one is gonna be hard to beat. I love how ruggedized the build is. A portable speaker should be able to withstand life’s perils. The 360-degree sound output is also well-thought; it just makes sense.

I really appreciated that despite the Boom moniker, the audio was controlled and balanced. The sound quality is on par with what I would expect at the price range. Although, at a retail price at $199, the Boom 2 is not cheap. Check out retailers like Amazon for a slight discount.