Smartphone manufacturer UMIDIGI (formerly UMi) is not one to shy away from controversy. Following our report on their iPhone 7 knockoff the UMIDIGI G, a new high-end model has appeared on UMIDIGI’s website.

This time, it is said to incorporate features that can only be found in the highest, most cutting-edge smartphones.

One such high end feature is being touted as the stunning looking “all-screen” (basically its a big screen without any frame around it).

They are calling the new model the CRYSTAL, and its safe to say UMIDIGI appear to be worryingly obsessed with throwing down the gauntlet to Xiaomi and their Mi Mix.

According to UMIDIGI’s website – The Crystal is going to have two versions. The Lumia edition as the pro version, and the all-metal edition, which is said to be the first all-metal unibody all-screen smartphone.

Both versions are likely to include a MTK Helio P25 processor with 4GB RAM and 64GB ROM, and 5.5” full-HD AMOLED screen, dual camera and rear finger print sensor. 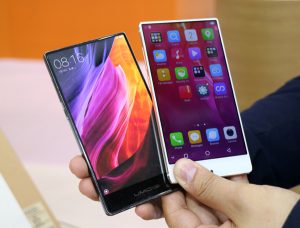 The UMIDIGI Crystal will be available to purchase from the 15th of June, and for a limited time you can get it for a reduced pre-order price of $99 by subscribing on their website.

The clock is ticking…..