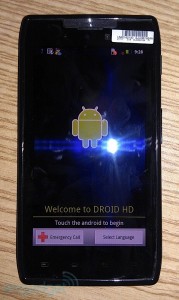 Engadget has scored a gallery-sized collection of images for an unannounced Motorola handset known (for now) as the Droid HD. The pictures arrived as part of a larger group of photos that also included the Droid Bionic. And since we’re not too keen on posting one leaked Bionic image after another, we’re going to skip right on by to the Droid HD.

Looking at the pictures we can see that the phone offers a massive screen size, presumably in the range of 4.5-inches. Normally we’d expect a qHD (960×540) resolution for something in this vicinity but we’re hopeful that this could be a 720 HD display. It is a Droid HD after all. Flipping the device over, the camera on the back is marked as 8-megapixels with capability of recording 1080p video. Toss in microUSB, micro HDMI-output, external SIM and microSD card slots and we’re beginning to drool on our keyboards.  Engadget surmises that the Droid HD has a thickness of between 8.5mm-9mm, putting it on par with the Galaxy S II and its 8.49mm.

There is no indication as to who will offer this phone nor what it’s model number is, but the aesthetics and ‘Droid’ moniker smell an awful lot like a Verizon phone.  Maybe we’re looking at the Dinara? Aside from the 13-megapixel camera, everything else lines up.

Additional images can be found at the original source, Engadget.